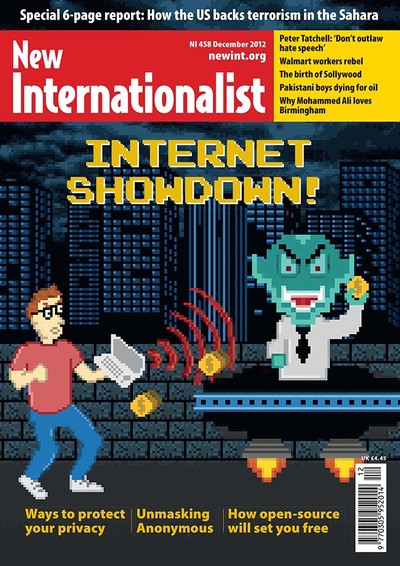 Internet rights are the human rights of the future - and a global community of computer geeks wants to help you secure them. December's issue of New Internationalist gets all techie, dives into the world of free and open source software and meets those digital pioneers offering protection from snooping governments and marketeers.

We get behind the masks of political hackers Anonymous, with writer Quinn Norton, and marvel at designs - that are free to use, change and share - for new technologies for everything from prosthetics to small-scale hydroelectric power. We dip our toes into the weird and wonderful world of the 'makers' whose 3D-printers are turning data into the new raw material, while taking to task outdated and overbearing copyright laws along the way.

Plus - American mischief in the Sahara. A shocking report by African expert Jeremy Keenan on the escalating conflict in Mali reveals that the US and other Western powers have been colluding with the Algerian secret service to create terrorist incidents that justify the wider 'war on terror' in the region. - See more at: http://shop.newint.org/uk/new-internationalist-magazineni458.html#sthash.0NEnJlrb.dpuf