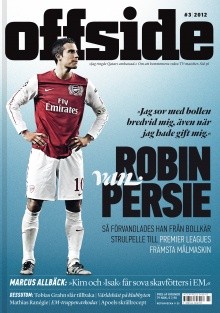 Offside is a Swedish football magazine. It is published six times a year but there are often an extra issue published in connection to larger events, such as the FIFA World Cup. It takes its name from the football law of the same name. The magazine was started in March 2000 and had an average circulation of 18,400 in mid-2005. Each edition of around 130 pages has three to five long articles of 10–30 pages and several shorter interviews and reports.