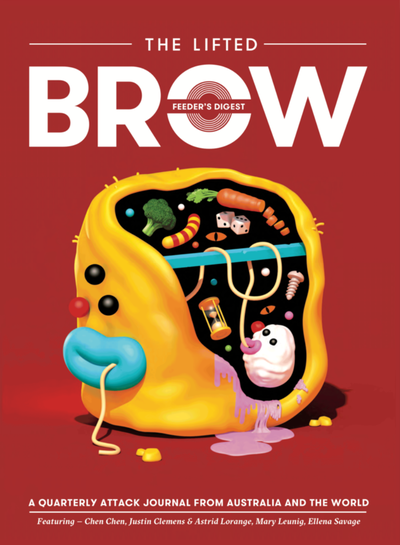 The Lifted Brow features work from Australia and the world in a high-quality print magazine, published four times a year. Its focus is on longform nonfiction and fiction, commentary, criticism, comics, poetry, visual art, and work that could be categorised as 'uncategorisable'.

“In medicine, the lifted brow is an important sign: it tells us many things because of its unusual innervation. If you have a stroke that paralyses one side of your body, your ability to lift your brow will be preserved, as each side of the brow receives innervation and power from both hemispheres of the brain. Wipe out half your brain and you’ll be left with full brow-lifting ability. Such is the importance of the lifted brow. To wipe out one side of the brow, forget the brain, what you need is a direct attack on cranial nerve VII. Hit that nerve—with say, botox or herpes—and it will be as if a power line has been felled; despite nerve VII being supplied by two stations (left and right brain) it’s light’s out for one side of your brow. In short, the lifted brow is stroke proof; it reigns supreme in the face of out-and-out higher-centre destruction. Its power to express is protected and preserved from all but the dirtiest of attacks.

In this issue of The Lifted Brow we have stories of grief and horror: the ravages of anorexia; being paid a pittance by a pharmaceutical company to ingest untested, unnamed drugs which may or may not kill you; a psychiatric illness that affects the machines around you; operations; slow death. Susan Sontag famously wrote that everyone born holds dual citizenship: to the kingdom of the well and the kingdom of the sick, that when you cross the border you take many people with you. The stories herein show us the way sickness reverberates from the body it inhabits, shockwaves spreading wide. They describe bodily chaos and meltdown; the attempt to make ourselves well or cope with inexorable decline. Having a doctor for a parent fails to protect Mike Day from illness. Alice Williams watches her father slowly deteriorate as he waits for a donor organ. Doctor Lisa Mitchell can’t fix her grandfather’s heart and Peter Goldsworthy diagnoses Jesus as an FLK. David Kelly watches a shaman in Peru treat his dying friend with a floating egg. Hannie Rayson sits in a Spanish hospital, terrified at the unexplained appearance of two gloved men: Christ, they're going to give me an internal examination. Both of them. As Fiona Wright tells us: Illness is a foreign country. We do things differently here.”

—from the editorial introduction by Karen Hitchcock, guest editor of The Medicine Issue