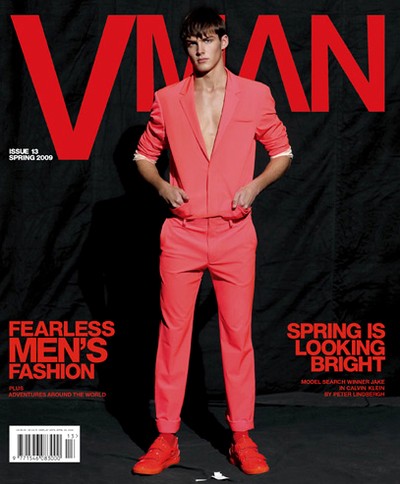 COVER STORY Fantastic Four CJ and Jake, winners of the second VMAN Ford Model Search, show off Spring’s best looks alongside finalists Aiden and Michael VMEN Alexander Skarsgård Sweden’s sexiest man opens up about playing a vampire on the HBO hit True Blood Johnny Simmons The young actor leaves his child-star days behind with roles in a slew of dark films Justin Long With a pair of new films, the guy from the Mac ads is becoming a bona fide leading man Michael Fassbender The Irish-German actor shed 30 pounds to portray an I.R.A. soldier on a hunger strike Lars Horntveth The self-taught Norwegian composer is making a new kind of classical music Diskokaine After making an homage to Italo disco, the Austrian producer has fresh musical goals FEATURES Go the Distance British explorer Ben Saunders ruminates on conquering the Arctic An Iowan at Sea Native Midwesterner Chad Hudnut is a different breed of sailor The Apollo Program Sam Spiegel and Ze Gonzales traveled the world to make their debut album as N.A.S.A. Make Art Not War A former Nazi bunker in Berlin has a new life as a one-of-a-kind art gallery This Side of Paradise Meet Hawaii’s foremost researchers on the science of land, sea, and space The Art of Structure The continuing creative collaboration between Miuccia Prada and Rem Koolhaas A Heroic Feat Director Zack Snyder adapts the dystopian comic Watchmen for the big screen The Ultimate Suit The history of the spacesuit provides a reminder of the power of good design Night Moves Lewis Hamilton and the stars of Formula One go to Singapore for the first night race Born To Explore Discovery Channel host Josh Bernstein is an explorer for our modern times Viva Tel Aviv We celebrate the one-hundredth anniversary of Israel’s cultural capital VMAN News Clothing, destinations, music, art, and books that every VMAN should know about The Right Stuff Diddy, Chris Paul, and Alex Kapranos reveal their favorite belongings FASHION Spring Things By Mel Bles Head To Toe By Cameron Krone Out On a Limb By Bela Borsodi True to From By Willy Vanderperre Spring Scenes By Various Photographers Doutzen Disrobes By Sebastian Faena Meet Mr. Miley By Doug Inglish Color Me Bad By Josh Olins Raf Simon’s Vision Quest By Willy Vanderperre