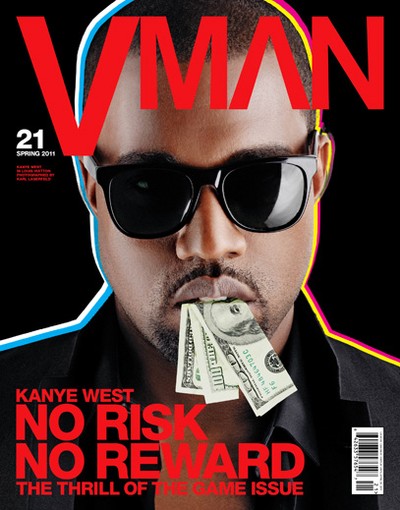 COVER STORY NO RISK, NO REWARD Kanye West: a portrait of the artist as a man VMEN SHILOH FERNANDEZ: NEW TEEN IDOL Hollywood’s newest hunk is hell-bent on not being just another pretty face LUCAS TILL: NEXT ACTION STAR The action star shows us how he gets in fighting shape KYLE MARTINO: SOCCER STAR TURNED TALKING HEAD The former footballer is taking his competitive edge to a television near you SEAN AVERY: HOCKEY’S HOTTEST HOOLIGAN The iceman cometh…in Balenciaga NASH EDGERTON: DAREDEVIL STUNTMAN The Aussie adrenaline fiend is literally on fire GEORGE ST-PIERRE: MIXED MARTIAL ARTS CHAMPION The most dangerous man in the world is a Zen master BALTHAZAR GETTY: FAST RIDER The leading man with a legendary last name is hell on two wheels RICHARD BERANKIS: RISING TENNIS STAR The burgeoning racket master is poised to take total court control LIL BUCK: URBAN BALLET BREAKOUT A genre-breaking dance prodigy in his own words, and in action (courtesy of Bruce Weber) SETH KUHLMAN: A DAY WITH BRUCE WEBER The multisport athlete brings his competitive edge to a whole new arena STYLE SAFETY GLASS Get an eyeful at 100 mph A WINNING HAND Ante up in style TIME MACHINES In the digital age, analog is still in our future UOMINI, OH MY! Dolce & Gabbana’s latest literary turn is one for the boys SPRING’S STANDARDS Re-work your wardrobe with new takes on time-honored traditions VMAN NEWS A global sneak peek for Fall, and what’s new for Spring FASHION WARRIOR: A REAL AMERICAN HERO By Hedi Slimane BOBBY LLEWELLYN: SOCCER STAR By Bruce Weber OLYMPIC FENCERS By Cedric Buchet GLEEFUL CREATURE: CHORD OVERSTREET By Sebastian Faena GAME ON! By Terry Tsiolis GYMNASIUM By Kacper Kasprzyk FEARLESS: BOTH SIDES OF THE LENS By Sam Taylor-Wood, Neil Burger, Sofia Coppola, Tony Goldwyn, & Gregg Araki BODY SCAN by Daniel Lindh IN MEMORIAM REMEMBERING CHARLES DEVOE Bruce Weber’s tribute to the athlete, model, actor, and friend who left us too soon