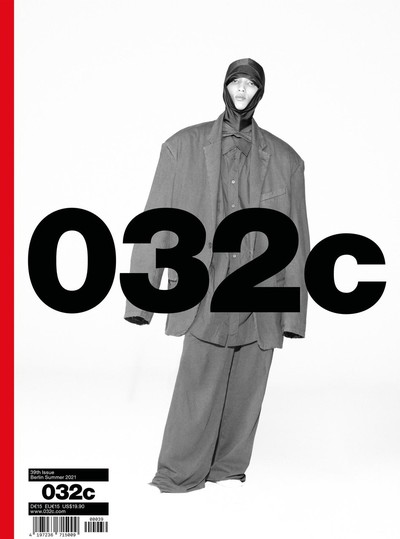 032c is a contemporary culture magazine that fiercely believes in the intelligence of its readers, and rises to the challenge of surprising them. Published twice a year, it is both timely and timeless—a celebration of and for the most cutting-edge in art, culture, and fashion. 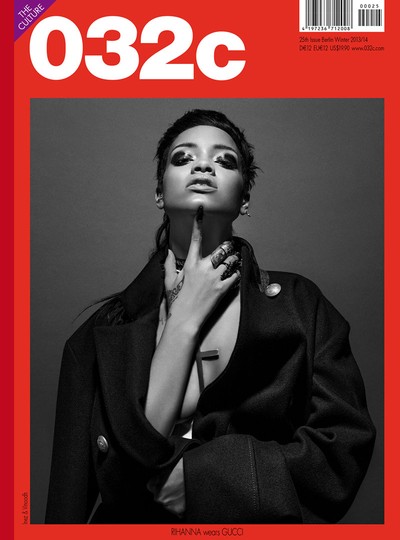 Guest-edited by Cornelius Tittel of Die Welt, our cover dossier on PICASSO AND THE GERMANS IN 1913 takes us back to a European society on the verge of catastrophic change. It was the ground zero of modernism, and while Picasso was denounced as the “Cubist Bluff,” a small yet significant group of German-Jewish dealers embraced the painter who would go on to become the greatest artist of the century.

RIHANNA is the unfiltered and fiercely productive icon that every era needs and obsesses about. 032c invited Dutch photography duo Inez & Vinoodh to portray the pop star in a studio on Broome Street in Lower Manhattan for a 22-page fashion story.

A favorite among the avant-garde of the 1930s, Italian fashion designer Elsa SCHIAPARELLI closed her legendary house in 1954. This year Christian Lacroix was invited to design an haute couture collection to officially reinaugurate the label. 032c commissioned Juergen Teller and Kristen McMenamy to capture his tribute to Schiaparelli on a Greek island in the Aegean Sea.

How does NIKE avoid being a victim of its own success? The answer is HTM, a three-person design collaboration between CEO Mark Parker, designer Tinker Hatfield, and creative consultant Hiroshi Fujiwara. In “Nike: The Spirit Machine,” Jonathan Olivares and Gary Warnett tell the story of this core R&D team at the heart of the multibillion-dollar company.

“TOMI UNGERER is the most famous children’s book author you’ve never heard of,” Phaidon Press stated on the occasion of republishing the Alsatian artist’s illustrated books from the 1950s–70s. Ungerer, who has made more than 150 books that range from children’s literature to erotica, has juxtaposed works from the past with new collages for 032c in a 22-page story.

The work of artist CYPRIEN GAILLARD navigates between architecture and nature, geography and psychological states. For 032c, Gaillard has created a sculpture edition. Modeled from a recent series of collages of images from National Geographic, it’s a tiny monument to the historic publication, which turns 125 this year.