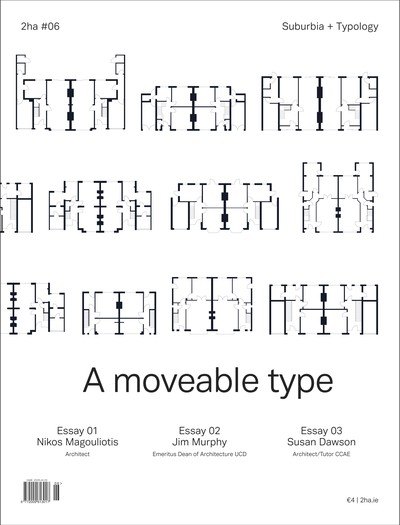 2ha is an independent magazine interested in the suburbs.

Issue 06 considers the relationship between typology and the architecture of suburbia. Three essays respond to the evolving spatial types that define the suburbs as a coherent condition.

Nikos Magouliotis (Architect) describes the architecture of the Greek Maison Dom-ino; an ad-hoc and pragmatic form of development that has slowly reshaped the landscape of Greece since its emergence in the post-war period.

Jim Murphy (Emeritus Dean of Architecture UCD) surveys the history of the semi-detached house, uncovering its possible origins, eventual crystalisation and subsequent variations; as well as its role in the suburbanisation of Ireland.

Susan Dawson (Architect/Tutor CCAE) sets out the realities of designing a 21st Century housing project in Adamstown, Co. Dublin and imagines an alternative typology for building a suburb.