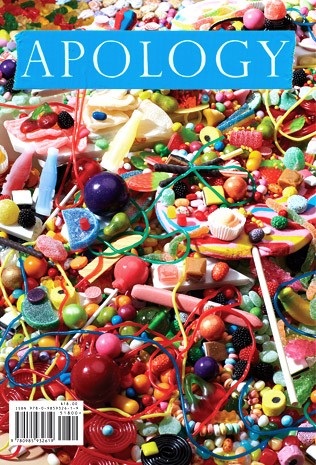 Apology is a new magazine that contains literature, interviews, essays, reportage, humor, photography, and art. In other words: pretty much everything. It’s a general interest magazine for people whose general interests aren’t general. It’s a sophisticated alternative to sophomoric magazines; it’s a sophomoric alternative to sophisticated magazines. It’s a make-your-own-pithy-observation-that-goes-here magazine.

The second issue of Apology includes new fiction by Eileen Myles, Laurie Weeks, and Patrick deWitt; the 1939 debut story by noir legend David Goodis; lost poetry from 1967 by Charles Willeford; a group of stories and poems by Paul Maliszewski with paintings by Duncan Hannah; the selected discography of Black Flag in food form by chef Brooks Headley; Tim Heidecker on Mork After Mindy; a portfolio of new photographs by Jerry Hsu; a collection of photographs from 1991 of teddy bears (trust us); a rave maze by Superjail! artist Christy Karacas; an essay that reconsiders the wonders of Goethe’s The Sorrows of Young Werther; an intimate visit to the Beverly Hills home of Jackie Collins; and more, including a hefty special section on baseball that features an interview with George Will; a documentary portfolio by Tabitha Soren; and a selection of baseball-related art by Richard Prince, Dan Colen, Andrew Kuo, and Raymond Pettibon; and more. Always more.