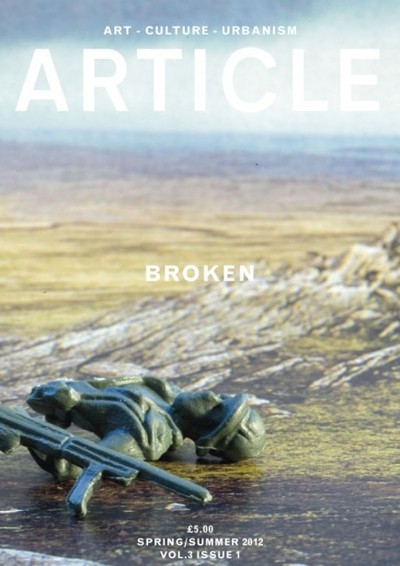 Article is a magazine about culture. It has its roots in the north of England, the place where we live. It’s our starting point for exploring art, architecture, culture, design, music and town planning.

Rather than focus like an angry bloke in a Wetherspoons on the terrible state things are in, and the even more terrible things people are trying to do about them, we decided to look at what being broken might actually mean.

With this as a backdrop features in the issue include an amazing photo essay by Edmund Clark commemorating scenes from the Falklands war. There’s an in depth interview with artist Jeremy Hutchinson about his project Err, which saw factory workers around the world asked to produce a one-off deliberately faulty product.

Bill Drummond – artist, writer and musician – gives an interview in which he talks about degeneration, conceptual compositions and rationing music. This interview is the first of 25 he has agreed to give for the rest of his life.

Printed by Evolutionprint in Sheffield, the magazine is 84 pages of delicious mixed litho-print, on three weights of paper.