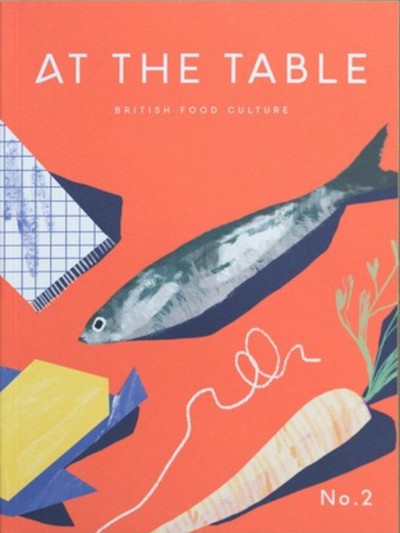 Our annual magazine focuses on British food culture and the stories that surround it, showcasing the best long-form food writing, photography and illustration. Printed on thick matte paper and thread sewn, it’s a beautifully designed magazine to collect and keep on your bookshelf with timeless themes and an innovative approach to its subject.

The world of food is a big place. It’s not just about the hottest restaurant or recurrent seasonal recipe. It’s about the details, the people, the stories, and the big ideas. And it’s personal too – everyone has their own individual likes, loves, quirks and obsessions.

At The Table is about opening up the space to talk about food and giving people the freedom to find their own voice (and appetite).

In issue 2, Diana Henry rhapsodises about her love of menus, Rachel Roddy explores the connections she found between the honest northern food she knew as a girl and the gutsy cooking she discovered in her adopted city of Rome, and Alexander Lobrano recalls the British food he came to love as a hungry American student in 1970s London. We are also honoured to be printing an article by the late Elizabeth David, a writer who arguably did more than anyone to change this country’s food culture for the better.

Photographer Rachel Louise Brown captures the atmosphere of London restaurants at closing time, Jamie Freeth focuses on a very unusual form of street food, and we travel to the coast to consume preposterous ice cream sundaes and hear fishermen’s tales. And there’s a dash of poetry, fiction and a comic strip thrown into the mix for good measure.