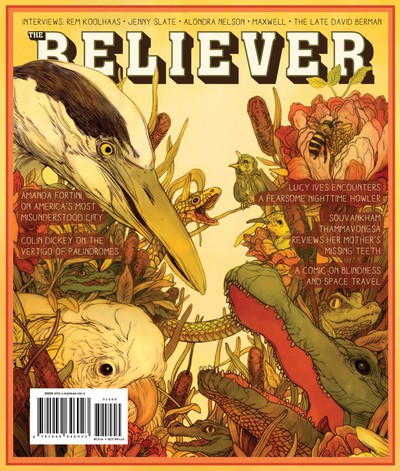 The Believer is a monthly magazine where length is no object. 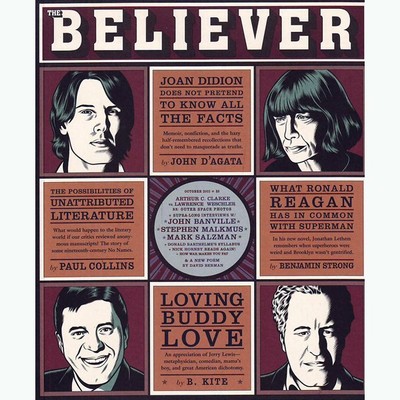 FULL TEXT Joan Didion’s Formal Experience of Confusion by John D’Agata Some memoirists hide behind their crisply recollected facts; Joan Didion offers herself unadorned, confused and blurry, and struggling to remember. Survival of the Oddest by Mark Kamine The problems of free will, an invented God, and impossible love: Novelist Nicholas Mosley practices for catastrophe.

FULL TEXT Children of the Corn Syrup by Shea Dean War has made us fat, and a Granny Smith apple strafed with pesticides is no more “natural” than a can of corned beef. Criminous Victorians by Alexis Soloski Detective fiction: one part escapism, one part law-and-order, and three parts damn good story.

Read the Book That You Are Reading by Paul Collins Readers ask questions about books; lazy reviewers offer answers about authors. Should we send them anonymous copies?

The Jerriad: A Clown Painting (Part One: Nutty Around the Edges) by B. Kite Lending Jerry Lewis to the French has been a magnanimous gesture—but it’s time to take him back.

FULL TEXT Far Out by Arthur C. Clarke and Lawrence Weschler A distinguished futurist and an idiosyncratic philosopher-writer debate the intelligence of machines and the future of wonder. Avengers of Gowanus by Benjamin Strong Jonathan Lethem’s new novel watches America shift from the richly textured world of Marvel comics to the flattened plane of DC.

Mark Salzman interviewed by Joe Loya This is no beauty makeover: the transformations of Mark Salzman, novelist, musician, teacher, and martial artist.

FULL TEXT Light: 1956 Lamp with Fairy and Mushrooms by Dean Bakopoulos FULL TEXT Underway by Various About the Party: a new poem by David Berman

Schema: 1920: A Historical Map of a Typical Year by Ben Greenman