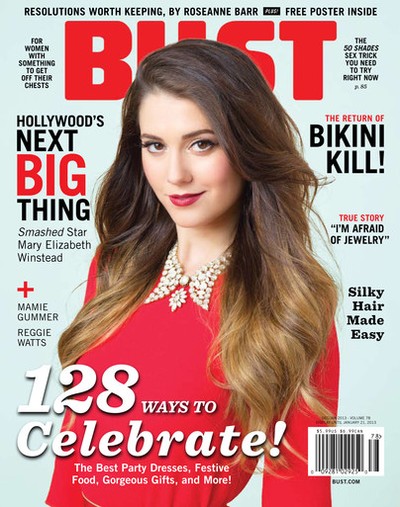 BUST Magazine is a women's pop culture magazine that is published bi-monthly by Debbie Stoller and Laurie Henzel. FOR WOMEN WITH SOMETHING TO GET OFF THEIR CHESTS

Table of Contents Dec/Jan 2013 FEATURES Mary, Mary From kicking butt in Scott Pilgrim vs. the World to breaking the chains of addiction in Smashed, Mary Elizabeth Winstead is having an on-screen breakthrough. By Eliza C. Thompson Resolutions Worth Keeping America’s favorite TV mom gives self-improvement advice for the new year that has nothing to do with dieting. By Roseanne Barr Queens of the Neighborhood Riot grrrl pioneers Bikini Kill are commemorating their 20th anniversary by keeping the dream alive. By Lisa Butterworth All That Glitters A woman with an unusual phobia explains why diamonds aren’t always a girl’s best friend. By Raquel D’Apice Cold Comfort Look hot in the snow with fashions inspired by Doctor Zhivago. Photographed by Amanda Bruns, Styled by Cannon for Judy Casey REGULARS Editor’s Letter Dear BUST

REAL LIFE No-bake thin mints; car care for thrifty chicks; Jell-O gets a glamorous makeover; and more. Eat Me Soup’s On! By Chef Rossi Mother Superior Forsaken keepsakes mark the end of an era. By Ayun Halliday Around the World in 80 Girls Know all the tricks from Bricks to Kingston. By Saba Igbe