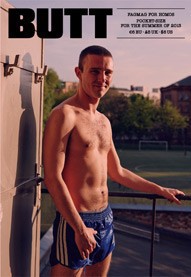 Here’s a serious mug shot of Ed Droste, who interviewed his friend Nico Muhly, the sensationally successful classical composer from New York City. Ed himself – the singer of Grizzly Bear – was interviewed in BUTT 15.

POLAROIDS God knows where he gets his out-of-stock Polaroid film from, but sexy-crazy Benjamin Fredrickson from Minneapolis continues to document his saucy adventures with great aplomb.

BRONTEZ What’s not to like about a deliciously dark penis? Frisco fixture Brontez Purnell writes about his insatiable appetite for black boys. You can see a picture of Brontez in his full glory on page 30; photographed by Seth Bogart.

DER UNTERWÄSCHEKATALOG This relatively long German word means ‘underwear catalog’ in English and is also the title of a 16-page full-color portfolio by esteemed German artist and London-resident Wolfgang Tillmans.

BUTT’s German editorial import Felix Burrichter likes a good piece of barbeque meat just like the two cover bears from Texas that he interviewed for this issue.

PINKMAN A jolly Japanese homosexual with a very gay tattoo interviewed by BUTT’s Adam Baran, whose portrait can be seen above. Photography by Dirk Zschunke.

Writer Travis Blue has nothing but sweet memories of the time he had his man-hymen popped during the annual Twin Peaks Fan Festival.