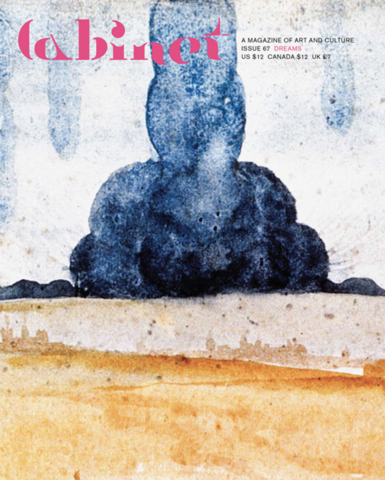 Cabinet is an award-winning quarterly magazine of art and culture based in New York that confounds expectations of what is typically meant by the words “art,” “culture,” and sometimes even “magazine.” Its hybrid sensibility merges the popular appeal of an arts periodical, the visually engaging style of a design magazine, and the in-depth exploration of a scholarly journal to create a sourcebook of ideas for an eclectic international audience of readers, from artists and designers to scientists, philosophers, and historians. 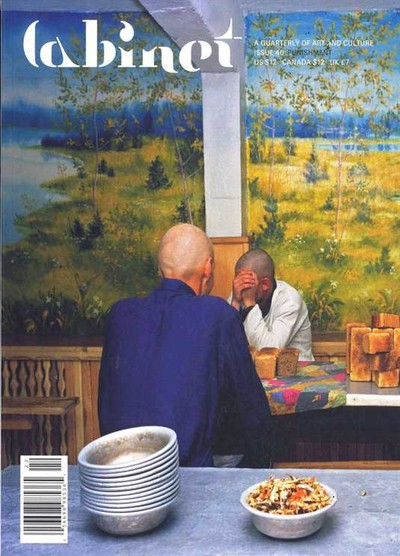 Columns Colors / Blond Leland de la Durantaye When the brightness began Ingestion / What Is Fusarium? Adam Jasper A fungus among us Inventory / The Tokens Christopher Turner Orphaned at the Foundling Hospital Legend / In Hades There Is No Statute of Limitations Wayne Koestenbaum The importance of being Ernest Main Cybernetic Revolutionaries Eden Medina Technology and politics in Allende's Chile Talking at the Movies Kevin McMahon Managing the voice across the history of cinematic sound Law and Odor Ned Beauman Scent as a chemical weapon The Tattoo Solution George Prochnik A zag, a zig, a beast, a grid, a swirl, a sword, a word, a Lord D.I.Y. Eye in the Sky Andrew Toland Masters of all we surveil Punishment Just Deserts: An Interview with Danielle S. Allen Justin E. H. Smith and Danielle S. Allen Punishment, citizenship, and the construction of authority Artist Project / Zona Carl de Keyzer Practicing Restraint Will Wiles The madness of the straitjacket Punishment and the Myth of Natural Order: An Interview with Bernard E. Harcourt Eric Anthamatten and Bernard E. Harcourt "Free" markets and the carceral state Disciplinary Loaf The Wardens of Cabinet Cruel and unusual nourishment Regarding the Pain of Others? Dusty Keelson-Maar Snuff spectacle in the age of the scaffold Who Better to Punish than the Innocent? Justin E. H. Smith Capital punishment and human sacrifice Artist Projects / Penal Codes Ellen Harvey, Lin + Lam, Francesco Simeti, and Javier Téllez Hell Is a Funhouse Mirror D. Graham Burnett Dante's Inferno and Dante's Inferno Celltexts Ines Weizman and Eyal Weizman Books behind bars The Corrections: A Three-Generation Roundtable on Punishment in the Home Jeffrey Kastner The look, the voice, the threat And Postcard / Proxy Cipher Vietnam Frank Heath Bookmark / Hot Ticket