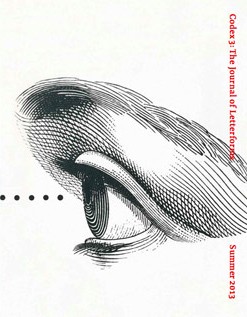 Codex 3 was bursting at the seams again and so we have split the material into two issues with the advertised feature on the classical Roman capital becoming Codex 4 and all of the other material remaining as Codex 3.

This wonderful issue begins with a colorful review by James Clough of the HWT Chromatic Set, the first group of typefaces in the Hamilton Wood Type collection that P22 is digitizing. Next up, Frans Janssen takes a look at the famous 1768 Enschedé type specimen; then an in-depth interview of type designer Freda Sack. Canadian type designer Nick Shinn writes about the hidden history of type in the 20th century, while Greg D’Onofrio and Patricia Belen of Kind Company provide a fascinating & detailed look at Lester Beall’s pioneering corporate identity manual for Connecticut General. Alexander Tochilovsky and Emily Roz follow with a profile of the Herb Lubalin Study Center of Design and Typography at Cooper Union. This is supplemented by a beautiful foldout of Gastrotypographicalassemblage designed by Lou Dorfsman and Herb Lubalin for CBS. Plus a glorious glimpse of the rich architectural and monumental lettering tradition at Yale University, and much more.