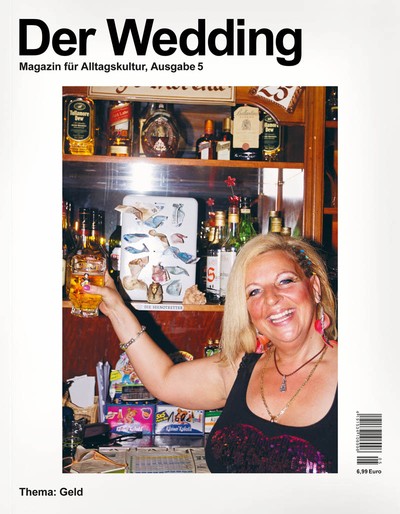 »Der Wedding« is the only national magazine for everyday culture in Germany. Every edition is dedicated to a single theme, a phenomenon of everyday life and an interface between urbanism, society and culture. In doing so, »Der Wedding« looks behind the façade, spends time with people and reports – directly and at length – on their experiences, problems, expectations and ideas. Every edition is completely redesigned to fit the topic. The magazine is independent and appears

It’s rude to talk about money, or so says conventional wisdom. A silly custom, thought the editors, as they discussed together the topic of the new issue. Money makes us think in categories like ‘Haves’ and ‘Have-Nots’, and dominates practically every part of daily life. Simply put, cash rules everything around us, in the big picture as well as the small.

It’s well known that, in Berlin district Wedding, where the magazine “Der Wedding” is produced, money doesn’t grow on trees. Rather, it’s locked up tightly behind bulletproof glass or in vaults, as the local pawnbroker explains in an interview about his business. Quick cash can also be found In a quite different context, promised in questionable job postings in the confidential ads, a few of which one of our writers answered, landing him in some rather shady business. An IT technician is satisfied with less – he owns fewer than 100 things and explains to “Der Wedding” why this asceticism has become for him more like wealth. And Chrissy, the bartender at a local Wedding pub, tells about the money that her regulars stash behind the bar.

As always, the editors of “Der Wedding” found these stories right at their doorstep, because after all, where are large-scale phenomena better observed than in the small-scale: the every-day.