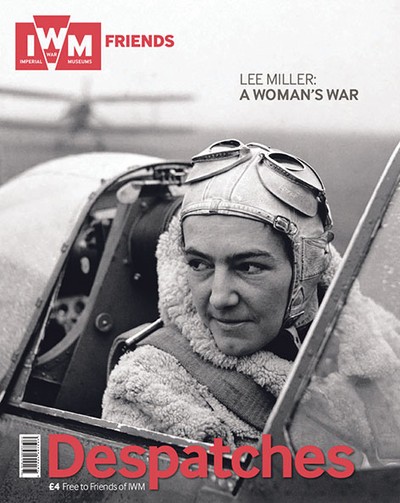 Inspired by people’s experiences of war, Despatches http://www.iwm.org.uk/sites/default/files/public-document/despatches_sampler_Summer2015.pdf draws inspiration from our archives as well as respected historians, artists and social commentators. From essays to book reviews to cutting-edge photography, Despatches profiles the work creating the most interesting debate about war and conflict.

The winter 2015 issue of the bi-annual magazine of the Friends of the Imperial War Museums. In this issue UKIWM’s Research Curator of Photography Hilary Roberts looks at the wartime career of Lee Miller, one of the most important female war photographers of the twentieth century. "Lee Miller: A Woman’s War" is at IWM London from 15 October 2015 until 24 April 2016, open daily (except 25, 26 December) 10am to 6pm, Lambeth Road, London SE1 6HZ. Free exhibition admission for Members. Other features include: David Hare on films of the Second World War and "Fighting Extremes: From Ebola to ISIS" in which IWM Historian Matt Brosnan describes a new display at IWM London.