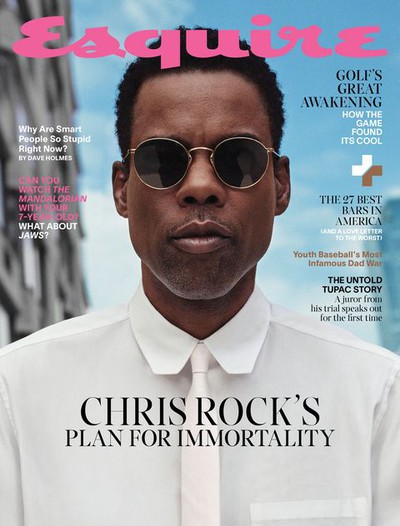 Man at his best. 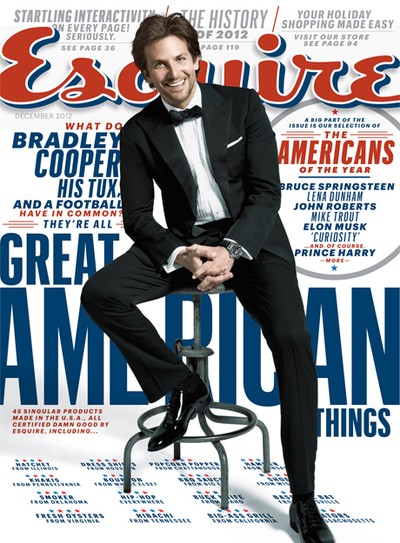 BEFORE WE BEGIN • The holiday elf • Letter from the editor • Gifts!

BRADLEY COOPER: ESQ&A America's favorite young leading man talks about success, ponytails, and being an actor with a graduate degree. Plus: An interruption from David O. Russell.

MAN AT HIS BEST: CULTURE The best books of the year, the remake of Red Dawn, and something called "global warming."

FUNNY JOKE FROM A BEAUTIFUL WOMAN By Jaime Lee Kirchner

MAHB: INSTRUCTION Punch you can light on fire and a new holiday food tradition, courtesy of the Cajuns

SEX Female condoms, how to cleanse your sex life, and a questions that could lead to an awkward conversation with your father.

THE ESQUIRE GUIDE TO HOLIDAY GIFTING Because the present is never more important than the presentation. Plus: Wrapping-paper alternatives!

STYLE A jacket just as suited to work as it is to climbing, the best leather boots, and a new take on overcoats. Plus: The designer who turned a bag company into a fashion brand.

A THOUSAND WORDS It's never been a better time for books. Somebody please tell all these whining writers. By Stephen Marche

THE AMERICANS OF THE YEAR

THE ORAL HISTORY OF 2012 Surving the Aurora shootings to finishing an Olympic race on a broken leg: harrowing and heroic moments of the year — as told by the people who lived them.

ELON MUSK The man behind Tesla and SpaceX has enough will for all of us. By Tom Junod

SERENA WILLIAMS An exclusive national survey on how the presidential race stands, who voters expect to win, which candidate lies the most, and which would win in a fistfight. Plus: Clinton versus Reagan — who would America vote for today?

CLINT DEMPSEY An exclusive national survey on how the presidential race stands, who voters expect to win, which candidate lies the most, and which would win in a fistfight. Plus: Clinton versus Reagan — who would America vote for today?

LENA DUNHAM She's building an empire. For better or worse. By Ross McCammon

BRUCE SPRINGSTEEN He still rails against a system that screws the little guy. DOes it matter if people stopped listening? By Tom Chiarella

PRINCE HARRY An honorary American, if only for the fact that he understands the purpose of Las Vegas. By Stephen Marche

TRAYVON MARTIN Before he became another flash point in America's painful and never-ending racial drama, he was a seventeen-year-old boy. By John H. Richardson

CHIEF JUSTICE JOHN ROBERTS He surprised the nation when he cast the deciding vote to uphold Obamacare — and in doing so he made the court his own. By Charles P. Pierce

JOHN HICKENLOOPER In a summer of tragedy and ruin, Colorado's governor found a way to bring back hope. By Mike Sager

TOM RIVELLINI The NASA engineer who oversaw he landing system for the Mars Curiosity rover is on to the next thing — something bigger. By Mike Sager

LOUIS FREEH We shouldn't have needed him to get to ther bottom of the Penn State scandal, but we did. By Luke Dittrich

BRYN MOOSER AND DAVID DARG The boys of Haiti needed something to live for. Bryn and David brought them baseball. By Mark Warren

ESQUIRE STYLE Everything you need to know about wearing black tie.

THE BEST DAY OF THE YEAR One last exceptional moment from 2012.