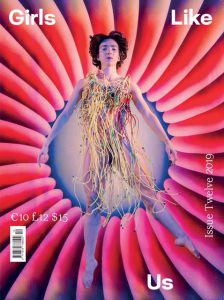 GIRLS LIKE US is an independent journal turning the spotlight on an international expanding community of women from all genders within arts, culture and activism. Through personal stories, essays and vanguard visuals GIRLS LIKE US unfolds feminist legacies in arts and writing. Mixing politics with pleasure, the magazine is mapping new routes towards a feminist, post-gender future.