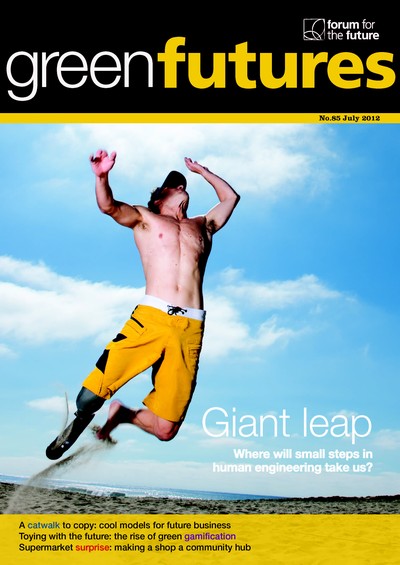 For all that we complain about the stress and hassle of urban living, there’s something very seductive about the city. And it’s hardly surprising. We’re drawn to it in search of work, love, people and power. No wonder that in empires past, exile from the capital was a fate close to death. The very word ‘politics’, after all, means ‘concerning the city’. Sure, some people escape to that rural idyll, all roses-round-the-door seclusion. But for most, if they’re honest, it’s mainly just swapping a view, not a way of life. A case of urbe in rus, sustained by wifi.

But if there’s one whacking great downside to cities, it’s the fact that – the blessed cyclist excepted – we spend half our time going nowhere slowly, stuck in gridlock or waiting for the bus. We shrug our shoulders as though it’s inevitable. But it needn’t be. There’s no immutable law of physics that says it has to take hours to get across town.

In ‘Round, round, get around’ [p18], we look at smart new ways in which the cities of the future might break free. Many involve innovations in technology, while others just mean thinking (very) differently – often getting what we need without travelling at all. Some even bring the country into town, such as the spectacular spiralling market gardens featured on p10 – the latest incarnation of the much-hyped ‘vertical farm’.

No amount of high rise agriculture will ever produce all the food a city needs, of course, let alone the vast array of other products that keep urbanites purring. Few of us give much thought as to how these all arrive on our shores. It might as well be by magic; in fact, much of it is by ship.

It’s long been an article of faith among environmentalists that sea freight is vastly superior to air. And it’s true that, tonne per tonne, the sea is greener. But a simple slogan of ‘ships good, planes bad’ hides a murkier picture. Most of the ships on today’s seas are old, dirty and polluting, and together they pump at least as much carbon into the sky as aviation. Which makes shipping a big, fat sea elephant in the living room of climate change – one that’s just starting to get noticed. In ‘Sea change’ [p26], Huw Spanner explores how leading companies are responding.

As with cities, a looming climate and energy crisis is spurring some imaginative new ideas. Some seem almost ingenuously simple. Take the practice of ‘slow steaming’, which makes a virtue of a snail’s pace delivery for the surprising amount of freight which isn’t time sensitive. Then there are new technologies, like fuel cells, and reinventions of old ones too – the return of sail power (only this time the sails are enormous kites, tugging vast container ships over the waves). There’s even talk of nuclear-powered freighters – although the prospect of a Somali pirate getting his hands on one of those will probably keep that particular solution firmly on the drawing board, and quite right too…

Piracy, some wag remarked recently, is just about Africa’s only booming industry. It was meant to be flippant, but it epitomised a received wisdom about the continent as basket case which is starting to look somewhat outdated. The unlikely but undeniable rise of Africa is one of five key trends we’ve identified which could help reshape thinking in 2011. For the rest, see page 16. And here’s hoping your own year shapes up nicely.