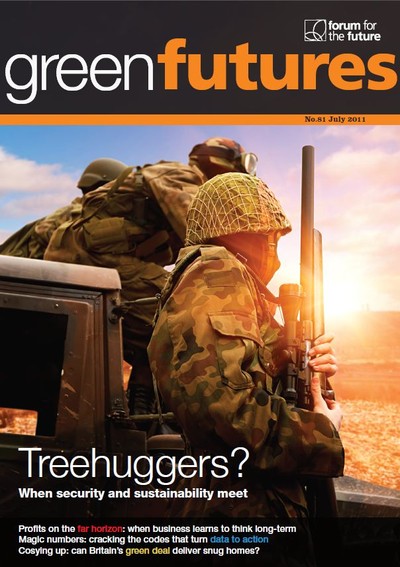 It’s been nearly ten years since Al Qaeda’s hijackers shook America – and the West – to the core.

As the anniversary approaches, expect the media to gorge itself on retrospectives. You can see it now: ghoulishly endless reruns of the planes crashing into the towers, followed by the inevitable panel discussions. What does 9/11 mean today? ...Has Al Qaeda won or lost? …What would the world have looked like if it had never happened?

Pertinent questions, particularly the last one.

Because back in those shell-shocked days of September 2001, there was much heady talk of how nothing would ever be the same. Some saw the attack as the first shot in a ‘war of civilisations’ which would define the coming decade and beyond. Other more sober heads pointed to its roots in the geopolitics of energy, and saw an opportunity for weaning the West off its addiction to oil.

Jonathon Porritt and I even dared to hope that it might open eyes to a realisation that security and sustainability are two sides of the same coin. “The trick is to start with what we have in common, rather than with the opinions – even the religions – which divide us. And what we have in common are, quite simply, the resources on which all human life depends. We find a way to share those equitably, or we will surely go to war over them.” [‘A river runs through it’, GF31, p4].

At the end of a decade “bookended by shocks”, as Alex Evans puts it [p21], it’s tempting to conclude, dispiritingly, that nothing has changed. We’re still addicted to oil, still mired in conflict, still facing growing competition for resources. As Porritt points out in this issue [‘Of Land, Water and War’, p16], such competition has lain at the heart of conflict since the dawn of civilisation – and it lies there still.

Technological revolution – in the form of mobile phones and social media – might have powered the Arab Spring, but it was triggered by anger over rising food costs, themselves partly driven by a surge in the oil price.

So have we learnt nothing since 9/11? I’m not so sure. At the very least, issues like food and energy security no longer have to fight their way to the top of the agenda. Geopolitics has elbowed its way out of the think tanks and onto the Cabinet table. And as Paul Gilding reveals in ‘Unlikely allies’ [p22], the stark implications of resource scarcity and climate change are leading that most conservative of institutions, the military, to push politicians to take action – on the simple grounds that, unless they do so, arms alone will never make the nation secure.

More positive, perhaps, is a dawning awareness that the “resources on which we all depend” can be the focus of co-operation, not just competition. In ‘Security forces’ [p18], Anna Simpson recounts ways in which, from Palestine to Peru, implacable enemies can make surprising common cause over everything from water to forests.

To quote ‘A river runs through it’ again: “It’s easy to regard the pursuit of sustainability as a luxury of the good times – [to be] eclipsed by the hard stuff of human conflict. But … the truth is that it’s a fundamental prerequisite for that most desperately elusive of shared human desires – peace.”

Something to bear in mind when those grisly re-runs hit the screen.