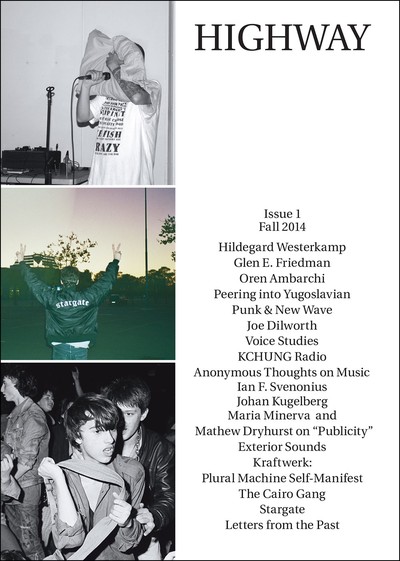 HIGHWAY is a biannual publication about life with music. The print and iOS editions are pocket-sized companions to the musicians, writers, artists, thinkers, documentarians, storytellers and objects we encounter.

Contents by and with: Our first issue opens with sound ecologist and artist Hildegard Westerkamp discussing her personal sound works, a brief history of background music and how we’ve all become addicted to music. Then, iconic photographer Glen E. Friedman shares the work ethos, creative vision and resolute stance he has maintained in his decades-spanning career. Friedman reflects and comments on the past, present and future of the music cultures he has documented as he reengages with his archive for his latest book, My Rules. One of the first interviews for My Rules, this lengthy and candid discussion is accompanied by a selection of photographs selected by Friedman.

Experimental musician Oren Ambarchi corresponds with the magazine about his adventures in Japan and his collaborative efforts in one of the most lauded trios in recent memory, together with Keiji Haino and Jim O’Rourke. Next, journalist Ian Martin takes time to look back and peer into the political and revolutionary potency of the Yugoslavian punk and new wave scene of the ‘70s and ‘80s with help from local witness and organizer Igor Vidmar. Martin’s text is accompanied by a selection of over 15 unpublished photographs by Matija Praznik at one of the movement’s central events in Ljubljana, “Disco FV.”

Photographer and musician Joe Dilworth has traveled and toured extensively and recently shared a selection of his photography with the magazine. Most of the photographs are rare or unpublished, among the selection: a proof sheet from My Bloody Valentine’s album shoot for “Isn’t Anything” in 1991. Issue 1 presses on with a piece on the Voice Studies series released by London-based imprint My Dance the Skull. Writer Jeff Daily revisits and dives in where few have ventured, chronicling parts of his engagement with this vast and experimental series of recordings. The magazine then corresponds with the KCHUNG Radio collective to check in on their free-form web broadcasting, off-site operations and how the group has maintained their independence. “Anonymous Thoughts on Music” presents selections from the website whythissound.com, of which we only know is based in the Midwest and is open to submissions.

Our “Publicity” editorial features original and commissioned responses to a selection of publicity photography from the past starting with writer and musician Ian F. Svenonius (“The fall of college rock and the rise of indie, or indie rock as the gentrification of punk”), followed by writer and exhibitor Johan Kugelberg (“Your heroes had to be compulsively made fun of”), singer Maria Minerva (“You’re just 2 cool 2 be true, can’t take my eyes off you”) and artist, thinker and partner in electronic music label PAN, Mathew Dryhurst (“Scattershot Practice”). This issue turns the corner with New York-based gallery Audio Visual Arts briefly discussing their Exterior Sounds box for public listening in addition to recent exhibition activity.

An essay by artist and thinker Nine Yamamoto-Masson titled “Plural Machine Self-Manifest” considers Kraftwerk’s peculiar 1978 performance of “Die Roboter” on German Television as the debut of the group’s aesthetic program we have come to know (or stand bewildered by). Yamamoto’s essay is followed by a conversation about the life and times of steadfast musician Emmett Kelly of The Cairo Gang. The conversation spans years and touches on Kelly’s tours and years playing anywhere and everywhere with everyone from Beth Orton to Will Oldham to street buskers abroad. Then, a brief check-in with the hard-to-pin-down electronic musician Lorenzo Senni about his side project STARGATE as well as his forthcoming label activities with Presto!?

This first issue of HIGHWAY concludes with Letters from the Past. First, local film producer Cliff Mack gives a brief on-the-ground look back at the Pop-trunk era in Houston as it coincided with the rise in popularity of DJ Screw. The final two letters come from the 2011 under-reported 111 Boadrum concert by ever format-shifting artists The Boredoms, as recounted by promoter Yuki Yanagi. And to close, a brief tour redux from the Gang Gang Dance US-Mexico 2011 Tour penned by musician Brian DeGraw.