Hole & Corner celebrates craft, beauty, passion and skill. It’s about people who spend more time ‘doing’ than ‘talking’, who put content above style, whose work is their life. Through a bi-annual print magazine and a daily updated digital alternative, we aim to promote local trade and talented individuals, whether professional or amateur, exploring and celebrating the landscape that inspires them. 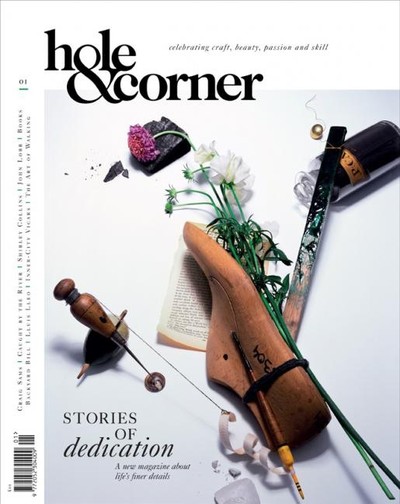 n our first edition, we meet the father of Fairtrade chocolate, macrobiotics and biochar, Mr Craig Sams, and shoot the breeze with the men behind Caught by the River – the website for anyone who looks out of an office window and thinks, ‘Christ, there’s got to be more out there than this.’ We talk to stonemason Teucer Wilson (named after a Trojan warrior and inspired by Motörhead) as well as John Lobb bespoke shoemakers, a young cheesemaker in Sussex, and the man who strips the willow for the world’s top batsmen. Then there are the new ladies of Savile Row, East End vicars, favourite walks and beautiful brushes… Contributors include John Balsom, Mark Mattock and Robin Broadbent; Matt Sewell and Stewart Walton; Richard Benson, Jude Rogers, and Peter Lyle.