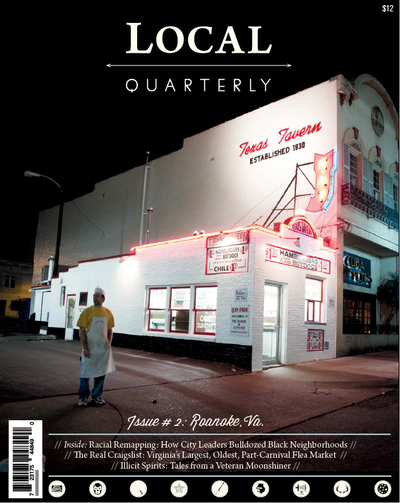 Local Quarterly tracks down overlooked communities and chronicles the neglected American narrative. We highlight regions that can never be packaged, sensationalized, or sold the way that pop culture magnifies perceived mass appeal. We will explore why Main Street still matters, communicate curiosities without cynicism, and report on serious, germane issues, preserving heritage where it’s dying and thriving. Our readers are the searchers and the residents, the rovers of mind and map who wonder what’s going on in Blythe, California, or Manhattan, Kansas. Take a pit stop and check in with Local.

Home to one big-ass neon star. An interview with an anonymous moonshiner. A documentary on Charles Cullen (no, not that one) but a public access celebrity known for his show, Chicken Chat.” A feature on the displacement of an African-American neighborhood. A harebrained piece about four writers exploring the enclaves of Roanoke from 12 a.m. -- 12 p.m. And poetry. Yes, poetry. Roanoke is a cultural melange, and truly a swarming microcosm of ethnicities, interests, and compelling characters.