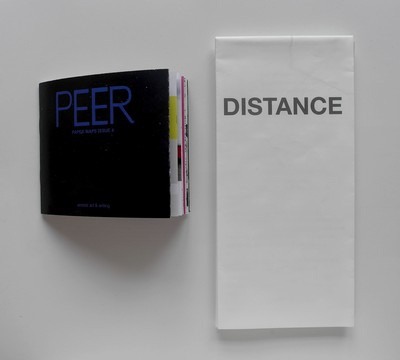 Peer is an international platform for artists that focusses on the written word, the image and the process of creating art. Peer is situated in the Red Light District where its public location hosts artists-in-residences, exhibits and readings. Peer publishes a quarterly magazine.

The 4th issue of Peer paper focuses on ‘Maps’. Maps speak in a visual language we’ve all learned to read but also talks about something universal, a sense of ‘place’. And how we connect to that place.

The physical shape of this issue plays with the shape of fold-up maps and how you use these. But also works to house the rather large insert ‘Distance’ which was made during the workshop; ‘Distance as time, distance as sound, distance as words’. The workshop, led by Marta Colpani, was part of her A.I.R. at PEER in the summer of 2016. The work started out to be about real distances but soon became about the interaction between the workshop participants.

Also featured in this issue: Esther Brakenhoff, an artist who regularly features Maps in her work, talks about her work process. A studio shot by Alexandra Hughes. The project ‘Screengrab’ from the photographers-duo WassinkLundgren, which is still in progress but already makes an appearance. London in a drawing by Rachel Ichniowksi, an endless list of ‘a truckers load and her journey in Europe for one year’ by Diana Tamane which is a portrait of her Mum who became a truck driver after her enterprise was bankrupt, and a navigation through the medieval world with art historian Jitske Jasperse. Throughout this issue you find a story, taking you on a journey leading you to more short texts by Marie Groothof whom we coupled with moving image-maker Lisette Olsthoorn, which resulted in their first collaboration. The short texts, combined with photo’ s, describe a passing moment in time and space with the woman, the man, a little boy or the girl–it could be about anyone and anywhere. They zoom in so much that something ordinary becomes slightly abstract.

Each feature is really about people and perhaps their personal borders, but the pitch-black starry cover, photographed by Bertus Dronkers, blurs the borders out.