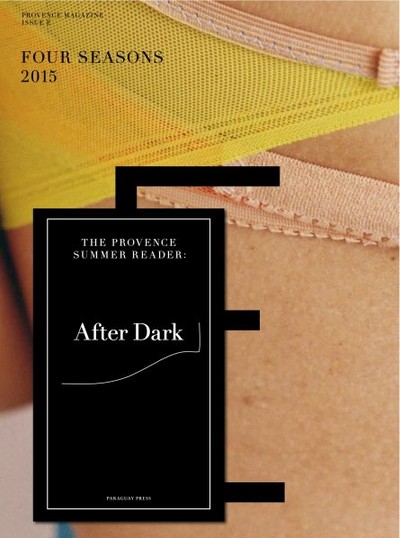 An 8 issues magazine about hobbies

The PROVENCE Summer Reader: After Dark is the second publication of a series of books co-published by Paraguay Press and PROVENCE.

The PROVENCE Summer Reader: After Dark takes it starting point—its body—from the kind of supplementary pocket books that are attached to the summer issues of various empire lifestyle magazines. As the title suggests, this book is a reader that gathers different—not to say heterogenous—material, by authors from diverse—though mainly art-connected— backgrounds, taking over a format known for its slippery, shallow, and entertaining content. Writings, fictions, documents, and poems come along with a suite of illustrations by Siw Umsonst. For a brief moment, this book was going to be a part of PROVENCE’s (pen)ultimate Issue C dedi- cated to Criticism Now. And then ... in or out. We recalled the moment in history (was it the mid or the late 90s?), when art magazines not only featured sec- tions with the best of the year, but also with the worst shows and artists of the year. It was Richard Pryor, according to Lane Relyea, who stated: “I never met any- body who said when they were a kid, I wanna grow up and be a critic.” Soon the title shifted to Dark Matter, which turned criticism to social relations, but it echoed other engagements and expectations. As writing eludes the purposes of criticism, and comes to favor stories, emotions, and open air over judg- ment and in-depth studies, it was eventually replaced by After Dark. After Dark is also a series of computer screensaver software introduced in 1989 by Berkeley Systems for the Apple Macintosh, and for Microsoft Windows in 1991. It is—or was—a means to avoid switching your computer off and to maintain its functionality while not at work, keeping the system running. With the invention of laptops sleep mode in the late 90s, which made turning devices off unnecessary, the then famous Aquatic Realm, Flying Toasters, and Slide Show screensavers vanished. Many of the contributions to this Summer Reader attempt to engage a problem of their own or perform their authors’ participation in the networked, social, and communicational spaces that are shared with cul- tural production at large. They bear witness to nights of labor turned into proletarian days—even though they were written for a book supposed to be read un- der the sun. Or (maybe) exactly because of that: who would dare to take a tablet or a laptop to the beach?