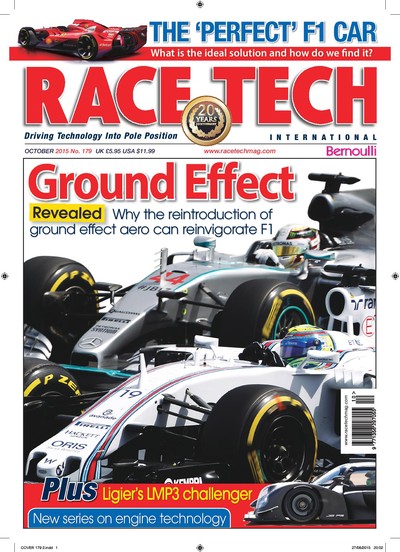 ON THE COVER Ground Effect - If we want the next generation of Formula 1 cars to overtake each other on the racetrack, there's one area the 2017 rules need to focus on. Our Expert Witness, a knowledgeable insider - explains why F1 is poised to introduce a modern ground effect NEW ENGINE TECH SERIES After 120 years most engine builders are selecting the camshaft valve event timing based on a combination of experience, dyno test results and a big dose of guesswork. But shouldn't we have moved on from there? David Vizard investigates power-critical valve event criteria - what works, and why? LIGIER JS P3 With Onroak's LMP3 challenger pounding the test track ahead of its competition debut, Chris Pickering examines the latest racecar in the Ligier bloodline F1 2017: THE SEARCH FOR THE 'PERFECT' CAR Do we go with Bernie's 1,000 bhp idea, Max Mosley's counter-proposal, or do we canvas the fans, the drivers or the tech chiefs? Sergio Rinland and Chris Ellis put forward their theories INDUSTRY NEWS IndyCar tragedy prompts renewed calls for single-seater canopies; NASCAR aero trials bring mixed results; Opel signs up for TCR Touring Cars; new engine joins BTCC grid; Formula E gears up for season two COMMENT With the ERS soon capable of providing potentially all of an F1 car's braking, Chris Ellis considers the role of the disc brake Last Lap: Sergio Rinland ponders the heroes of the past and the fans of the future FACE TO FACE LMP3 is quickly establishing itself as the first rung on the endurance racing ladder. The category may be new but, as ACO tech director Vincent Beaumesnil tell Chris Pickering, the dream has long been cherished FORMULA 1 The fight for fifth place in the Constructors' Championship, or the audition to become Renault's works F1 team? William Kimberley analyses the battle between Lotus, Force India and Toro Rosso SPECIAL REPORT: SIMULATORS Simulators are playing an increasingly important role in motorsport, from the amateur club racer to Formula 1. William Kimberley takes a look at some of the technology on offer TECHNOLOGY From nothing to racing in 105 days: how a revolutionary material helped develop a revolutionary car NEW PRODUCTS The latest new products launched in the motorsport sector