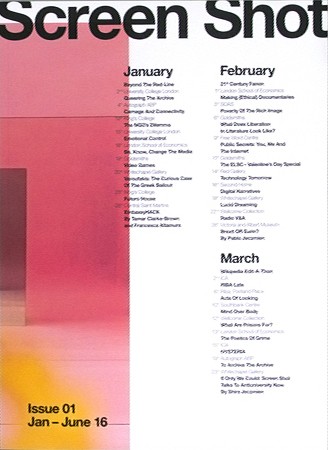 Screen Shot itself is an editorial project that tries to keep the reflectivity of a more traditional publication while also employing a semi-short, digital-friendly approach in order to fit within the constantly moving virtual space that surrounds us.

January to June 2016 has seen both revelations and regressions in the ways we see and interact with the world around us. It saw the start of virtual reality, discussions around universal basic income as well as political chaos and social shifts across national identities.

Screen Shot hopes Issue 01 can illustrate the complexities of these waves with a touch of humour, criticality and enjoyment.