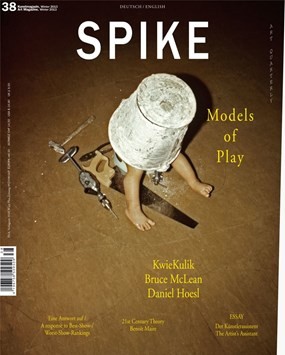 Low-budget, participatory and informal strategies are pitted against the institutional and commodity market system. Karen Archey profiles artist duo KwieKulik, one of the most important contributors to the Polish avantgarde of the 70s; Vincent Honoré interviews Bruce McLean about his playful proposals for what sculpture could be; and Daniel Hoesl talks about his debut feature film »Soldate Jeannette«. In our Theory series Benoît Maire continues the discussion on the role of objects in contemporary thought; Ingo Niermann stumbles upon the Gallery of the Unbelievers; a speculation on the online game CowClicker by Alexander Scrimgeour; and curator Antony Hudek looks back on Palle Nielsen’s »Model for a Qualitative Society« (1968), which transformed the Stockholm Moderna Museet into a playground.

Then Neither/Nor 2013 – our response to the end of year best/worst ratings – Timo Feldhaus, Piper Marshall, Krist Gruijthuijsen and others recall shows that left them with an ambivalent verdict; reviews of the Carnegie International in Pittsburgh by Joanna Fiduccia, Pierre Huyghe and Philippe Parreno in Paris by Dorothée Dupuis, and much more...