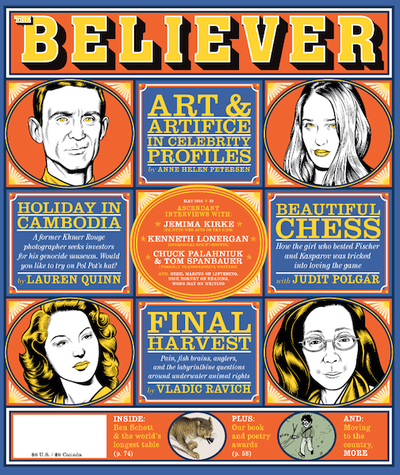 The Believer is a magazine of interviews, essays, and reviews. The Believer is an American literary magazine that also covers other arts and general culture. Founded and designed in 2003 by the writer and publisher Dave Eggers, it is edited by Vendela Vida, Heidi Julavits and Ed Park. It is published in San Francisco nine times a year.

Mr Nhem’s Genocide Camera by Lauren Quinn In Cambodia, an ex–Khmer Rouge attempts to open a museum of atrocity

What the Swedes Read by Daniel Handler

Wong May interviewed by Zachary Schomburg

Consider the Mort by Vladic Ravich Scientists, fishermen, and environmentalists contemplate the possibility of consciousness in fish, and what it might mean for the aquaculture industry.

Confidentially Yours by Anne Helen Petersen Behind the Hollywood celebrity-gossip industry complex.

Chuck Palahniuk in conversation with Tom Spanbauer “Focus on exorcising your demons in the work If you can do that, then you’ll succeed in the world.”

The Believer Book and Poetry Awards

Kenneth Lonergan interviewed by Lucas Kavner “It’s sort of embarrassing for me to be the boss.”

Schema: Things I Learned from Browsing the Catalog of the Leading Hotels of the World by Ben Schott