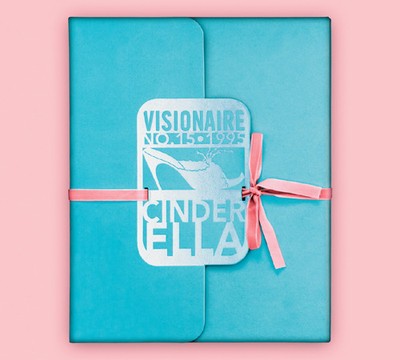 VISIONAIRE is a multi-format album of fashion and art produced in exclusive numbered limited editions.

The theme of this issue was the much-loved-and very fashiony-fairy tale ''Cinderella.'' We imagined we were making a film and asking each of the various directors (contributing artists) to shoot a scene. Raymond Meier portrayed Cinderella's ride to the castle and the magical moment when the glass shoe fits. Mats Gustafson transformed the pumpkin into a Rolls Royce. Bruce Weber cast the sexy prince. Our fairy godmother was played by legendary fashion editor Polly Mellen in one scene and by legendary drag queen DJ Lady Bunny in another. The one constant was the shoe, a vintage Roger Vivier for Christian Dior from the archives of the Metropolitan Museum of Art. It was like a game, in which everyone was doing his part, not knowing who else was participating and not knowing how any of the others' images would turn out. Even Glenn O'Brien, who contributed the text, did not see any of the visuals and was only briefed on various segments of the story. Once all the artwork and Glenn's text arrived, like magic, everything fell into place! It was like watching the shoe fit at the end of the story, right down to the pink-velvet ribbon chosen to go with the dusty-blue flock cover. It had to be FedExed from Switzerland and arrived just at the stroke of midnight! Limited Edition of 2000 numbered copies.