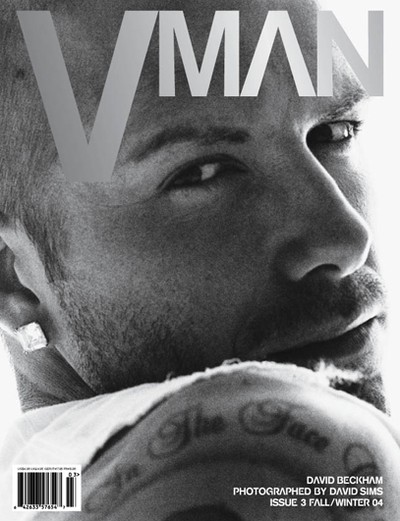 V a Man An artistic take on the season’s fashion trends Brit Pick Actor Hugh Dancy is the new Burberry guy Acting Up Ebon Moss-Bachrach did it with a sex zombie French Touch Aurélien Wiik is not an enfant terrible Swede Dreams Andreas Wilson is Scandinavia’s hottest export The Moderns Interpol is back—and better than ever Back to the Future Cars that stand the test of time Smells Like Heaven Fragrances to get you high Sculpture Culture A buildup of ideas Book It All the news that’s fit to print Listen Up Time to update your iPod Porn Storm The fine line between art and smut Art Lives What makes an artist tick? Time Warp Watch out for these watches Well Armed Strap one on Choose Your Weapon Accessories to kill for How to Wear Chanel A fashion tutorial Make a Face Bags, belts, and shoes with personality Why Rings? Ask Karl Lagerfeld The Player David Beckham up close and personal. Photographed by David Sims The Man Show Tim Blanks wonders what makes a man manly Full on Fall Nathaniel Goldberg lays it on Spring Forward An exclusive preview of the next season’s best looks. Photographed by David Sims Blow Up Mario Testino’s big hair moment Playgroup Preschool was never this much fun. Photographed by Luke Smalley A Matter of Size Willy Vanderperre’s sharp-suiters 7 Days of Me Stylist Mark Morrison’s guide to style. Photographed by David Armstrong Comme My Way Rei Kawakubo is a multitasking creative powerhouse. Photographed by Peter Lindbergh In Love Real-life couple Adriana Caye and Alexis Vinas take it off. Photographed by Mario Testino Tokyo Pop Inside Nigo’s bachelor pad. Photographed by Leslie Kee Johnny Be Good After wearing a jockstrap full of bees, Johnny Knoxville is going legit. Photographed by Terry Richardson Model Apartment Male models at home. Photographed by Carter Smith Hair to Stay Didier Malige on boxing, Madonna’s dreadlocks, and pubic hairstyles. Photographed by Bruce Weber and Inez van Lamsweerde & Vinoodh Matadin Inner Sanctum Helmut Lang’s serene work environment. Photographed by Elfie Semotan Happy Ending Backstage at the Spring 2005 shows. Photographed by Andrew Burmeister