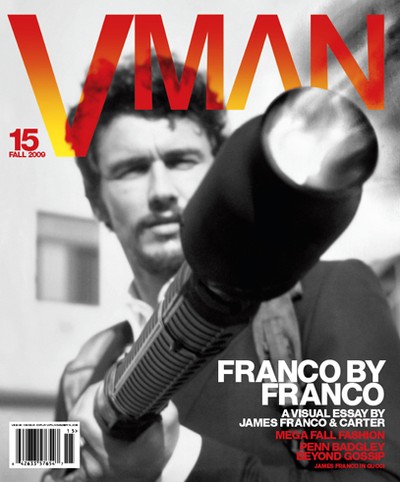 DEPARTMENTS VMAN CULTURE Our whistle-stop tour through the best in this season’s movies, books, music, and booze. Plus, Where the Wild Things Are! VMAN STYLE Kanye’s fashion sneakers, Russia’s it-boy designer, atelier idols, a tattooed style bible, accessories to die for, scents aplenty, Coveted Matter, and a chic peek behind-the-scenes of Yves Saint Laurent. Looking good, feeling good FEATURES DOUBLE-THIRD-PORTRAIT Ghosts. Fire. Motorcycles. Archery. Mannequins. Office furniture. What more could you ask for? Nothing BY JAMES FRANCO AND CARTER LONDON IS BURNING…AGAIN Four British bands on their way to becoming household names BY ALEX NEEDHAM PHOTOGRAPHY BY HEDI SLIMANE WHERE THE SAND MEETS THE SKY Three adventurers go on a thrill-ride through the war-torn Middle East. Plus a handy primer on the political state of Yemen BY NATE TRAIN, JOSH WINTERS, CHARLIE SMITH PENN BADGLEY: NOT JUST ANOTHER TEEN IDOL The Gossip Girl star isn’t just a teen idol- he’s a cultural phenomenon. The TV heartthrob gets personal BY DANICA LO FASHION ACTIVE DUTY BY MARIO TESTINO DREAM BLONDE BY SEBASTIAN FAENA AND SILVIA PRADA MOST VALUABLE PLAYERS BY CHAD PITMAN FUNDAMENTAL BY WILL DAVIDSON THE BIG CHILL PORTFOLIO BY 12 PHOTOGRAPHERS