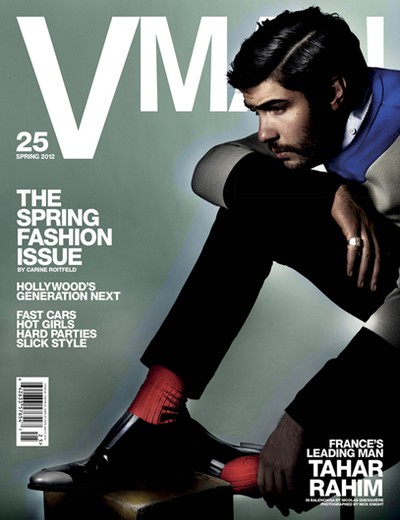 TAHAR RAHIM: A MAN FOR ALL SEASONS BY NICK KNIGHT France’s new leading man sets his sights on America, and we’re gazing right back

NEWS From the art world’s greatest tributes to technology’s greenest gadgets, snap into spring with our favorite things

BRING IN THE NOISE How a Broadway understudy found himself on the big screen, doing duets with Dolly Parton

THE MUSIC MAN The talented Trey Songz has ruled R&B with 4 albums. Here he speaks with Selita Ebanks about making Chapter 5

HIDING OUT WITH REEVE CARNEY Actor, front man, and crime-fighting crusader: spend an evening with the star of Broadway’s biggest show in history

FROM PARIS, WITH LOVE Guest editor Carine Roitfeld talks straight on men’s fashion, her take on masculinity, and putting together the perfect dinner party

HOLLYWOOD BABYLON BY SEBASTIAN FAENA Where have all the leading men gone? Dig through the rubble with Hollywood’s next great hopes

FRACTURED YOUTHS BY BRUCE WEBER Bruce Weber writes a heartfelt letter and assembles some photos for his friend, Carine Roitfeld

EL TORERO BY JEAN-BAPTISTE MONDINO José María Manzanares is more than a matador and muse to Riccardo Tisci, he is bullfighting’s bleeding heart

EVERYWHERE MAN BY PETER LINDBERGH Follow the shadow of our man-about-town, who turns Paris on its ear with sensational style

CALENDAR GIRLS BY WILLY VANDERPERRE For the year’s first issue, find your favorite month with a supermodel squeeze