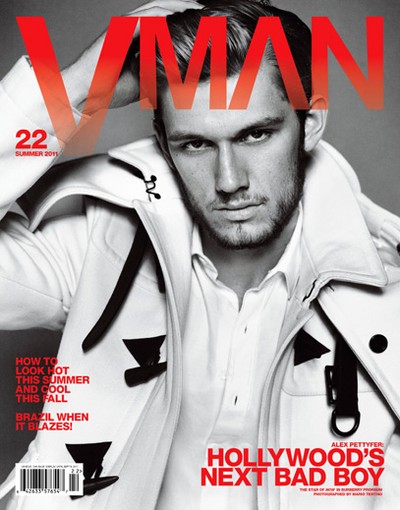 COVER STORY FROM DARKNESS TO WHITE BY MARIO TESTINO Alex Pettyfer: Hollywood’s next bad boy comes clean VMEN TEEN WOLF–THE NEW LYCANTHROPES MTV’s hair-raising new stars are sending vampires back to the grave PETEY WRIGHT–THE MODEL MUSICIAN The first VMAN Model Search winner has a new pursuit—pop rock GABRIEL KLABIN–BRAZILIAN FLYBOY The surveillance expert shows us how to fly across the globe without leaving your desk ANDREW RANNELLS–BROADWAY’S FUNNY MAN A singing and dancing missionary, brought to you by the creators of South Park FEATURES

THE RETURN OF V-MAN It’s a bird, it’s a plane, it’s…V-Man WHERE WERE YOU IN BRAZIL? Our favorite luminaries show us around the land of promise: sun, sand, Ciara OSKAR METSAVAHT–THE SOULD OF BRAZILIAN STYLE The founder of Osklen goes au natural, while remaining fully clothed STARFUCKER–BAND OF THE SUMMER Portland’s latest export has a sound as expletive as its name BREAKING THE WAVES Stanford, USC, and UCLA stay supercompetitive while splashing around BEST OF BRAZIL Andrea Dellal takes us on a tour of her Brazilian hot spots STYLE STEP UP AND BAG IT Excel with accessories from your hands to your feet STYLISH CITIZENS Models who take fashion from the runway to the subway VMAN NEWS Preview the who, what, where—and what to wear—for the summer months FASHION VIRTUOSO: CHARLIE SIEM by Alasdair McLellan THE RIO WORLD by Mario Testino IZABEL DOES IPANEMAI by Mario Testino BEFORE THE FALL by Sharif Hamza IT’S JUST MY IMAGINATION by Bruce Weber ADRIANA LIMA AND THE BOYS FROM BRAZIL by Pierre Debusschere