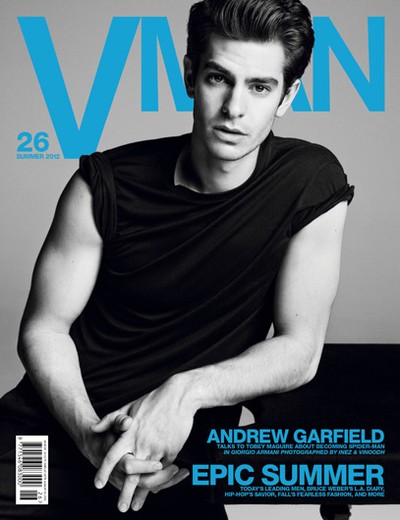 ANDREW GARFIELD BY INEZ & VINOODH Hollywood’s emerging leading man speaks with Tobey Maguire about the pitfalls of fame on the eve of this summer’s The Amazing Spider-Man VMAN NEWS Gym equipment for the outdoors. DSquared’s destination-packed Summer collection, a day in the life of decathlete Bryan Clay, a look at Nike’s Tom Sachs treatment, puls all the music to know, all the places to go, and all the products you’ll want in tow ART OF DARKNESS Breaking Bad actor Aaron Paul doesn’t know much about brutality…he just embodies it on tv ALL THE KING’S MEN HBO’s Game of Thrones has set a new precedent for television drama, thanks in no small part to these polished performers THE SECOND COMING OF DIEGO BONETA The Latin-American entertainer finds crossover with summer’s Rock of Ages movie but likes to let his music do the talking GAME CHANGE Rufus Wainwright’s expanding oeuvre moves toward the mainstream with the help of Mark Ronson THE SAVAGE AND THE SERENE BY SAM TAYLOR-WOOD For Oliver Stone’s Savages, Aaron Johnson enters a seedy world of drugs, kidnapping, and threesomes. Here, he finds peace in the country with is family IS WAKA FLOCKA FLAME HIP-HOP’S LAST HOPE? BY TERRY RICHARDSON The breakout sound of Wacka Flocka Flame spawned a sea of copycats. Now, with a new album, he’s ready to shoot up the Billboard charts BRUCE WEBER’S L.A. DIARY BY BRUCE WEBER Nobody captures the sun-kissed of California quite like Bruce Weber. In a tribute to his late friend Elizabeth Taylor, Bruce takes a tour of the Golden State in style MENSWEAR’S DAREDEVILS BY NATHANIEL GOLDBERG This Fall, men’s fashion gets fearless with bold collections from a roster of intrepid designers