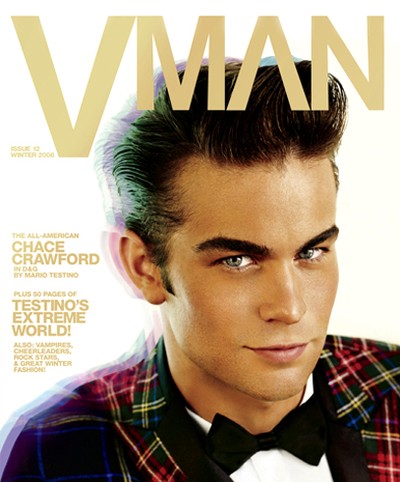 COVER STORY Cut to the Chace Gossip Girl’s Chace Crawford dishes on the show and reflects on his meteoric rise to stardom. By Mario Testino VMEN Emile Berling With roles in two French family dramas, the teenage actor is poised for a breakout Toby Kebbell The British actor cuts loose in Guy Ritchie’s new film, but leaves the debauchery on the screen Michna On his debut album, the New York–based DJ and producer rethinks electronic music Tristan Wilds After conquering The Wire, the Staten Island native finds a new home on the latest 90210 spin-off Dustin Lance Black Following his success with HBO’s Big Love, the indie screenwriter swings for the fences with the new biopic Milk FEATURES Make Media That Matters Current TV cohosts Max Lugavere and Jason Silva want you to join the media revolution In Living Color On the eve of a major career retrospective, legendary photographer William Eggleston remains as inscrutable as ever The In-Kraut A wave of adventurous young bands is taking inspiration from the krautrock movement of 1970s Germany Through a Lens, Darkly Octogenarian filmmaker Kenneth Anger claims he’s going to die this Halloween, but after more than sixty years, he’s still going strong Coming Clean Party-loving rock star Andrew W.K. explains how a haircut helped him discover his true self The Twilight Zone The hot young stars of the eagerly anticipated new vampire film Twilight bare their fangs Hunter and Hunted Deerhunter front man Bradford Cox has a knack for controversy surpassed only by his musical talent Sweethearts of the Sunshine State This year’s Miami Dolphins cheerleading squad takes a break from practice to offer a tour of the locker room Into the Wild Norway’s rugged outdoorsmen brave snow, ice, and extreme cold in pursuit of their favorite pastimes Home Is Where the Art Is Model Justin Kern’s Hollywood bungalow has become an epicenter of the L.A. art and music scene VMAN News Clothing, music, art, and books that every VMAN should know about The Right Stuff Andy Roddick, Chris Brown, and Italo Zucchelli reveal their favorite belongings FASHION Treasures Found By Joseph Heidecker Uncommon Scents By Vicente Pouso Face Off By Mario Godlewski One in a Million By Richard Burbridge Last Resort By Mel Bles Mantle of Greatness By JD Ferguson Extremes By Mario Testino