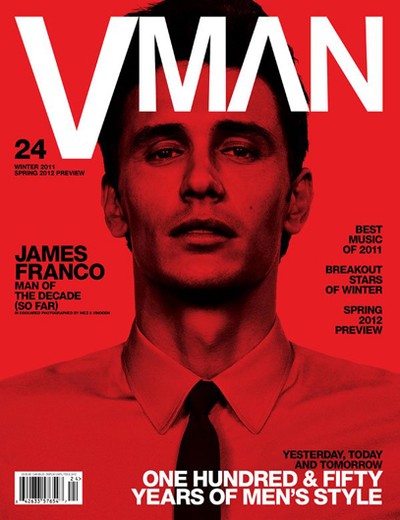 VMAN NEWS From Art Basel Miami Beach to menswear’s new meat, all the nexts you need to know

A HISTORY OF TASTE Some things age better than others. Here’s to never going out of style

THE 1880s: THE BIRTH OF VMAN Trace our VMAN-cestry by traveling back in time

THE 1890s: THE GILDED AGE BY KARL LAGERFELD Actor Édgar Ramírez gets gilded for glory in Wrath of the Titans

THE 1900s: MUYBRIDGE IN MOTION BY MATTHEW SCRIVENS AND TOM JARROLD Fitness and film were at the forefront of a century; here they both get put into motion

THE 1920s: THE SUIT AND THE SEA BY BRUNO STAUB The roaring ’20s saw the rise of the suit, both in and out of the water

THE 1930s: THE DAWN OF TRAVEL BY PAUL MAFFI The dawn of the commercial airline made style and shopping a global concern

THE 1940s: LIFE DURING WARTIME BY COLLIER SCHORR Whether in the barracks or on the battlefield, nothing is more inspiring than our boys in uniform

THE 1950s: GREASERS AND SQUARES BY SHARIF HAMZA At a sock hop, over shakes, or in a street fight, rock and roll came here to stay

THE 1960s: MAD MEN BY LACEY AND KARL BEAN The ’60s may have spawned revolution, but they also made the modern suit

THE 1970s: SUEDEHEADS BY BENJAMIN ALEXANDER HUSEBY A dancehall dress code suited the streets of the ’70s

THE 1980s: AGE OF EXCESS BY KARIM SADLI The decade of decadence dazzles again in Spring’s opulent optical prints

THE 1990s: GENERATION X BY RICHARD BURBRIDGE The angst of an age, through grunge, hip-hop, and rave

THE 2000s: BACK TO THE FUTURE BY IRINA WERNING Reluctant to embrace the Y2K? Safely regress to an earlier age

JAMES FRANCO: MILLENNIAL MAN BY INEZ & VINOODH One of the 2010s’ most prolific artists, James Franco continues to shock and awe with an exclusive collaboration with Douglas Gordon

THE 2020s: THE SHAPE OF THINGS TO COME BY DAMIEN BLOTTIERE Don’t fight the future. Fashion looks forward by getting chopped and fused