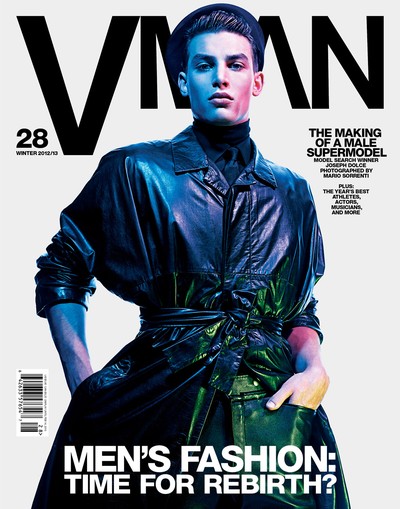 VMAN NEWS Vinyl, booze, and tuxedos—it must be Winter

PRIME TIMERS The movie theater is no longer the premier venue for checking out the industry’s top acting talent. Here are three of Fall television’s surest bets, from Downton to the Boardwalk

AN ORAL HISTORY OF GRIZZLY BEAR Ed Droste, the leader of Brooklyn’s most beloved band, recounts their journey from playing cafeterias to Radio City Music Hall

BE HERE NOW While the record industry continues to feed one-hit wonders to the masses, these original artists are finding their audience and bringing back a whole new alternative

THE SPORTING LIFE OF LADS IN LONDON BY BRUCE WEBER Off the field and out of the ring, meet the U.K.’s next champions of rugby, lacross, boxing, running, and more

A DAY IN THE LIFE OF A SUPERMODEL IN THE MAKING BY PHILIPPE VOGELENZANG  Model Search winner Joe Dolce is almost ready to leave his native Long Island behind and reign over the runway, but not without taking us into his world first