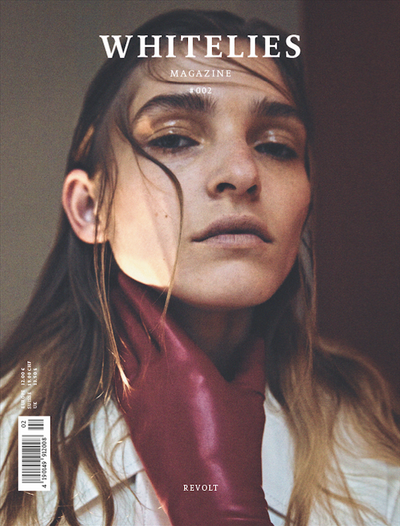 WHITELIES MAGAZINE IS A BIANNUALLY PUBLISHED FASHION AND CULTURE PUBLICATION POSITIONED AS AN INDEPENDENT PLATFORM FOR ARTISTS WHO DO NOT FOLLOW THE COMMERCIAL STREAM.

REVOLT - In our second issue we seek for the indicators for revolt movements within art, literature and especially fashion. Social movements, class and our gender roles influence the way we choose to represent ourselves. Throughout history revolutions have played out inside of closets. As we all know, style can help to affirm - or disrupt - the status quo. Fashion designers nowadays have strong political voices, and their creations speak for whole generations and movements. The most popular example would be Vivienne Westwood, who dedicates every show to a certain problem in society that she is involved in. When Rei Kawakubo and Yohji Yamamoto first introduced their collections to the parisian public, they disrupted the european style and the japanese culture became a crucial part in the heart of couture. With easy accessibility through the internet these days it has become even easier to explore mindsets and cultures through clothes. The voice of Gosha Rubchinskiy within the post soviet youth is a very good example for that.

Revolutionary movements can happen in every sector of our life. We asked leading designers, artists and journalists who work within movements of revolt to share their manifestos and views on the subject. Surprisingly the fashion world, which is trapped in a cycle of seasons and quickly changing trends, still has individuals who are working outside of the system, neglecting the system, staging their own revolt against it.