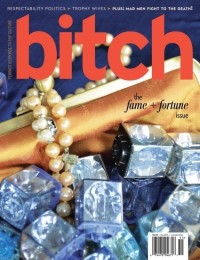 bitch, whose tagline is feminist response to pop culture, is an independent, quarterly magazine published in Portland, Oregon with more than 50,000 readers. bitch magazine is one branch of the reader-supported non-profit organization bitch media. The magazine includes analysis of current political events, social and cultural trends, television shows, movies, books, music, advertising, and artwork from a feminist perspective. In contrast with conventional women's magazines such as Self, Vogue, or Marie Claire, bitch explores gender issues in greater depth and from unconventional viewpoints.--McCormic, Sarah (August 31, 2006). "Magazine for women with brains". Seattle Post-Intelligencer

What do you think about bitch magazine?