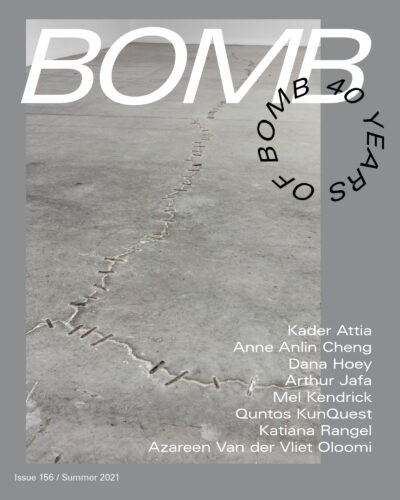 Revelations happen in conversations. They make art and literature more accessible, not only to the reader, but to the artists themselves.

Revelations happen in conversations. They make art and literature more accessible, not only to the reader, but to the artists themselves. BOMB Magazine delivers the artist’s voice through in-depth interviews between artists working across genre and media—collaborations that reveal their ideas, concerns, and creative processes through carefully developed dialogue—now and for posterity.

Named after Wyndham Lewis’s influential 1914 journal Blast, BOMB Magazine was launched in 1981 because its founders saw a disparity between the way artists talked about their work among themselves and the way it was described by critics. As a result, BOMB reinvented the question-and-answer format, developing an editorial method that delves deep into theory and practice, helping complex discussions to emerge. Like Blast, BOMB is edited by artists and writers.

Celebrating its 32nd year, BOMB pairs artists in conversation based on the relevance of their work to one another and nuances of personality. We transform lively, raw conversation into intellectually stimulating, yet immediate exchanges available on multiple platforms and across the web.

Our interviews are legendary. Because in the pages of BOMB, artists get to be the authors of their own tales. Our Archive contains over 1,200 interviews from the last quarter century—that’s 2,400 voices comprising an ongoing conversation that has changed the nature of cultural discourse. Considered primary documents of American cultural history, BOMB’s Archive has twice been awarded NEA Heritage and Preservation Grants, and was acquired by Columbia University’s Rare Book & Manuscript Library in 2004 and again in 2012. Thanks to a generous grant from the Andrew W. Mellon Foundation the complete BOMB Digital Archive is going to be available online worldwide for anyone to use free of charge.

Intimate. Intellectual. Interviews that change the way we think about the arts, by the people who make the arts—that’s what you will find in the pages of BOMB.