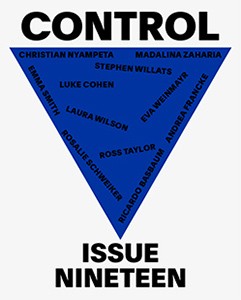 Control Magazine acts as a vehicle for proposals and explanations of art practice between artists seeking to create a meaningful engagement with contemporary society.

Control Magazine acts as a vehicle for proposals and explanations of art practice between artists seeking to create a meaningful engagement with contemporary society.

Published and edited by Stephen Willats, this pioneering magazine has documented the work of many artists, both from the UK and abroad and encouraged a wide discussion of artists’ practices. It has included contributions and original pieces from an extensive range of artists over its eighteen issues. Since 1965, the magazine has published work and writing by over 150 artists, including John Latham, Roy Ascot, Anthony Benjamin, Dan Graham, Mary Kelly, Helen Chadwick, Tony Cragg, Dennis Adams, Lawrence Weiner, Anish Kapoor, Martha Rosler, Jeremy Deller, alongside collectives and collaboratives such as Gallerie in Friedrichstrasse, Artists Placement Group and early producer’s galleries such as that of Dieter Hacker. Many of the artists have made artwork specially for the magazine.

Control Magazine’s function has always been to provide a resource for artists to discuss their work and, in particular, to make connections with other disciplines such as social or computer sciences, technology etc. Its eighteen issues provide a unique record of a specific area of art practice over four decades and this non-profit making publication has had an acknowledged influence on the practice of artists.

Alongside the magazine itself, there have been events held to launch certain issues, such as Cognition Control, Midland Group Gallery, Nottingham, 1972; the Symposium Art Creating Society at MOMA, Oxford, 1989; Art and Intervention at Wilma Gold, London, 2003.

All issues of Control Magazine are viewable in the Stephen Willats Archive, National Art Library, Victoria and Albert Museum.