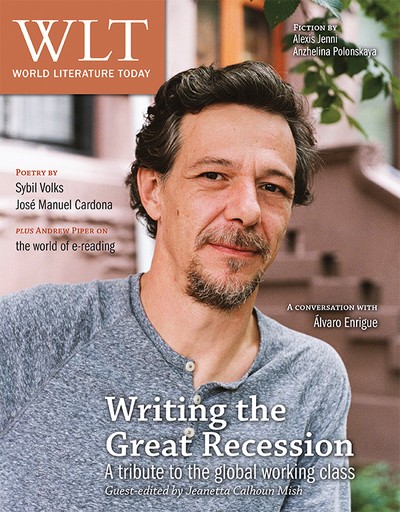 World Literature Today, the University of Oklahoma’s award-winning magazine of international literature and culture, opens a window to the world in every issue. Published six times a year, it features lively essays on writers representing dozens of major and minor languages, original poetry and fiction, special coverage of transnational issues and trends, author profiles and interviews, book reviews that span the globe, travel writing, children’s literature, and coverage of the other arts, culture, and politics as they intersect with literature.

Now, celebrating 85 years of continuous publication, WLT has been recognized by the Nobel Prize committee as one of the “best edited and most informative literary publications” in the world, and was recently called “an excellent source of writings from around the globe by authors who write as if their lives depend on it” (Utne Reader, 2005). WLT has received a dozen national publishing awards in the past ten years, including the Phoenix Award for Editorial Achievement from the Council of Editors of Learned Journals in 2002.