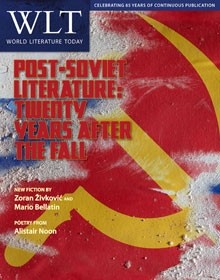 In the November 2011 issue of WLT, a special section devoted to Post-Soviet Literature features recent work from Russia and other former republics, twenty years after the collapse of the regime. Readers are also invited to discover the "metaphysical fantasias" of Serbian writer Zoran Živković in addition to short fiction by Mario Bellatin (Mexico), new poems by Alistair Noon (UK/Germany), and an interview with Samia Mehrez (Egypt).