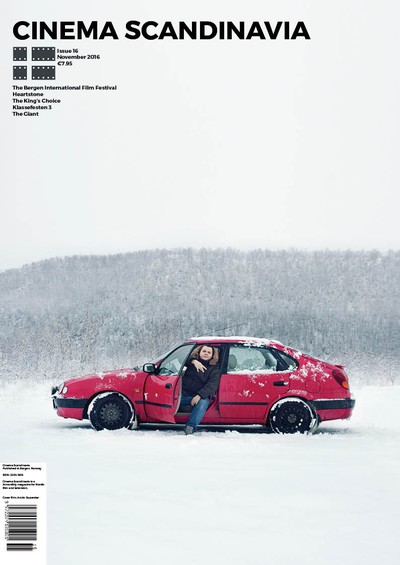 Welcome to our biggest issue yet!

This years Oscars selection for the Academy Awards, The King's Choice is a historically accurate, gripping drama by acclaimed Norwegian director Erik Poppe. We spoke to Erik Poppe plus actors Jesper Christensen (The Legacy) and Anders Baasmo Christiansen (In Order of Disappearance, Welcome to Norway!) about this film.

The Bergen International Film Festival regards itself as one of the biggest documentary festivals in Scandinavia. We cover our favourites from the festival - Til månen med bestefar, Arctic Superstar (cover film), The Islands and the Whales and Ambulance - which speak about everything from family heritage to the war in Gaza, plus rap music in unlikely places and environmental and cultural issues in the Faroe Islands. We speak to the film-makers of all these documentaries about the importance of the story they want to tell.

Cinema Scandinavia is on the ground at two important film festivals - first we cover a selection of Lithuanian short films that screened at the Encounters Film Festival in Bristol, and then we head to Toronto for one of the biggest films in the world, the Toronto International Film Festival, where we review Pyromaniac, The Oath, The Commune, Little Wing and The Happiest Day in the Life of Olli Maki.

Cinema Scandinavia includes a special section on new Nordic releases. This month, we take a look at the endearing and surreally beautiful The Giant, the first feature film from Johannes Nyholm. We also speak to the producer of Drone, an important documentary that weighs up both sides of the drone argument. Our in-depth interview with the Icelandic film Heartstone's director and producer give us insight into filming in Iceland and why the film is picking up awards at festivals around the world. We speak to the director of Wolf and Sheep and the youngest participant in the Cannes Film Festival's Cinefoundation, Shahrbanoo Sadat and the director and star of a new US production shot in Iceland called Autumn Lights, a film that feels like Bergman took a trip to Iceland for inspiration. Turning to comedy, we interview the stars of the Swedish I Love You: A Divorce Comedy and Denmark's The Reunion 3 about their new releases.

As always, Cinema Scandinavia contains a wealth of reviews plus information on where to see the films. This issue contains ten new reviews for films from the five Nordic countries.