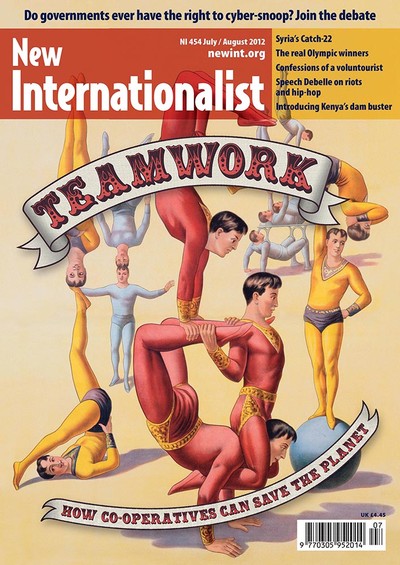 “Teamwork: how co-operatives can save the planet”

Look around for a moment. The world appears to a pretty unco-operative place, torn by vicious squabbles and bloody violence. Indeed 'watch out for number one' seems to be the driving credo behind a global economy ruled by greed, blind ambition and self-interest. But there's more to the story than that. There's another approach to human affairs that has yet to receive its due and is exactly the opposite of the cutthroat, competitive model model which drives corporations and agitates governments.

Co-operations: we would never have progressed as far as we have as a species without it. You could even say it's in our genes, as the new scholars of evolution have shown.

July/August's New Internationalist marks the UN's International year of the Co-operatives. Around the world more than a billion people are involved in co-ops as members, customers, employees or worker/owners. The crisis in growth and the global economic slump have uncovered an urgent need and a deep yearning for doing things differently. The continued success and growth of co-ops proves that's possible.