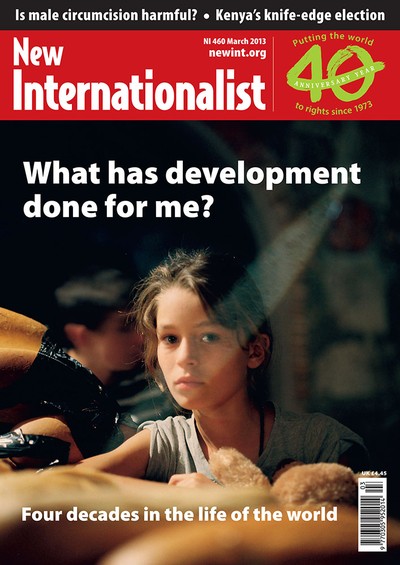 “What has development done for me?”

On the 40th anniversary of its first issue, New Internationalist looks back over the four decades in the life of the world that the magazine has covered. Is the 2013 of privatization, smartphones and debt crisis caused by bankers any better in human terms than the 1970s world of state planning, telexes and debt crisis caused by bankers? How much progress has the human family made in terms of improving life expectancy, challenging poverty and reducing inequality? And whatever happened to the idea of ‘world development’ that inspired the magazine’s founders?

The special issue also hears from a few of the key individuals featured in the magazine over the years to see what has happened to them since. Amongst the other features in the magazine there is an in-depth report from Mongolia, a debate on whether male circumcision is justifiable, and a country profile of Egypt as it enters another period of uncertainty.