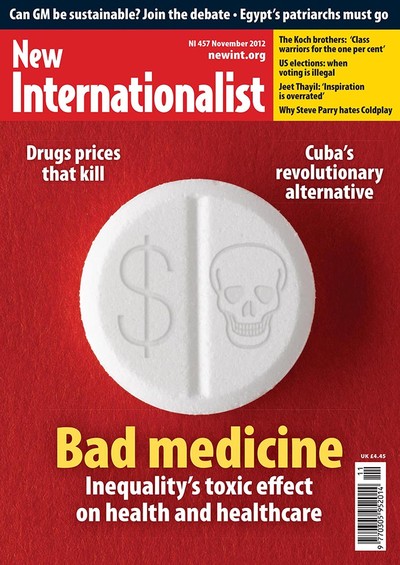 With medical attention increasingly rationed even in the wealthy West and ballooning concerns over the quality of life for a growing elderly population is the notion of ‘healthcare of all’ beginning to seem impossibly utopian? As our societies become increasingly stratified, tiered healthcare systems increasingly reflect inequality. Three decades of pressure by the likes of the World Bank and the IMF to push healthcare in a ‘user pays’ direction has contributed to dismantling notions of care provision as a right. And it’s not just care that’s affected. Study after study points out that inequality directly affects our health as well, impacting those at greatest disadvantage the most.

November's edition also inspects the issue of drug pricing, where the pursuit of profit clearly comes at a human cost. And it checks out the possibilities of a revolutionary medicine, rooted in the community, accessible to all. This was once an agreed goal of world leaders at the tail-end of the 1970s – can it be revived now?