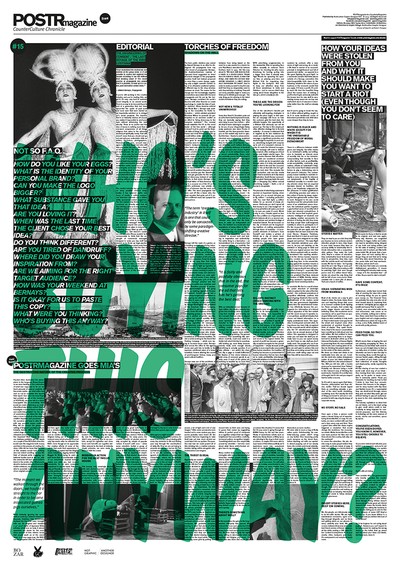 If you’re still working in the creative industry and you’re reading this: we get it. It’s very, very hard to maintain moral integrity in an amoral world. There is no way to be innocent if you’re part of a generation that has been spoon-fed the spoils of past wars and more wars that were started as we impotently watched on in vintage 90’s social paralysis. The injustice that is so blatantly obvious all around you makes it impossible to avert your eyes without witnessing the next atrocity. There is no justice and the idea of karma is nothing more than a one-word compression of all things religious that caters to the rationally stunted yet spiritually needy. That still doesn’t mean that you should just go out and sell your undeniable skills as writers, illustrators, photographers, filmmakers and, ehm, account managers to the first feudal lord who will take you under his roof – like a band of hired guns for the faceless cabal of multinationals. We are not asking you to climb onto the barricades and fling your burning Macbooks at the riot police; but it would be great if you could at least stop wasting your talents as creative mercenaries operating in a multibillion dollar moral vacuum. The term integrity can be more than a word on a briefing sheet in between a list of characteristics that a brand wants associated with them. It is possible for you to be funny, creative, touching and inspiring without selling a car, a pair of jeans or a life insurance policy. Just do it.

Is it unreasonable to think that the onslaught of commercial messages designed to make you buy stuff has caused us to throw up huge psychological barriers in our minds every time we step out the door? Has the idea of commercial communication seeped so deep into the cracks of our collective consciousness that the concept of non-trade-based human interaction has become alien to us? Welcome to POSTRmagazine #15: The Creative Issue, where we take a look into the wonder-less and uninspired world of the creative industry also known as the art-machine of the free market state!